The difference between winning and losing for short priced favourite Seasons at Randwick on Saturday most likely was what happened between the 1000m and 800m.

After appearing to be about to settle nicely outside leader Alassio she was forced to do that little bit more work as Fragonard kicked up inside her to keep her wide.

Consequently, as Punters Intelligence shows, Seasons ran the fastest section from the 1000m to the 800m of 11.18.

Leader Alassio ran 36.08 for her last 600m in running sixth. Of those on the pace Seasons was the only one left kicking with first, third and fourth all settling in the second half of the field.

Not surprisingly, Star Refelection was able to scoot home in 34.77, matched by fourth placed Kawaikini, to spring the upset.

There was merit in third placed Savvan’s effort though sectionally she wasn’t a stand out. She ran 35.13 for her last 600m, third fastest of the race, and 12.13 last 200m, also third best.

She did race wide without cover for most of the event yet was looking strongest on the line. 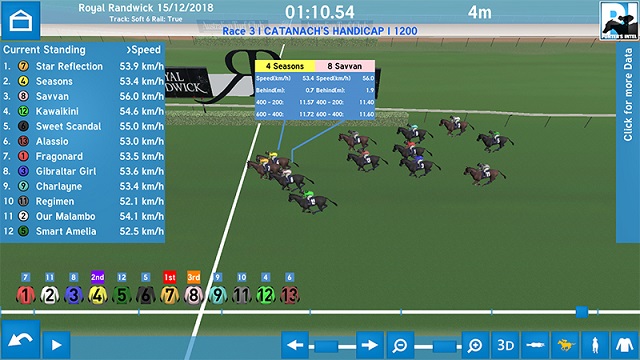 It was also hard to miss Aloisia’s booming finish in the Villiers Stakes (1600m) after giving away 23m at the 600m.

Mister Songman announced, yet again, he’s looking for a bit more than 1100m after his solid on pace third behind Deprive.

Stayer Berdibek produced a pleasing first-up effort over 1400m suggesting he might be about to strike form in the near future.

It was only his fourth start for John O’Shea and he’s had a stop-start year but he easily clocked the best last 600m of his event in 35.77 as he worked home from last into sixth place.