Her siblings set the bar high well before Still Reigning makes her debut at Warwick Farm on Wednesday but trainer Gary Portelli is hopeful the youngster can emulate them by kicking off with a win.

We’re of course talking about her half-sister She Will Reign, the 2017 Golden Slipper winner, who won on debut at Kembla Grange, and full brother Time To Reign who won at Randwick at his first start before claiming the 2019 Silver Slipper three starts later. 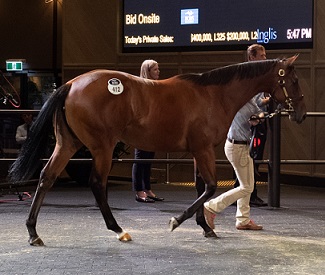 Still Reigning as a yearling going through the Inglis sale ring. (Pic: Inglis).

Because of those performances Still Reigning cost her owners, who include Neil Werrett and Max Whitby, $800,000 at Easter last year so there’s some expectation when she steps out in the All Too Hard @ Vinery Handicap (1100m).

Portelli is adamant the two-year-old has more than her share of ability but she doesn’t have the temperament that allowed both She Will Reign and Time To Reign to step out before Christmas.

“They either cope with being a two-year-old or they don’t and she was a bit backwards compared to the other two I’ve had, a little on the later maturing side,’’ Portelli said.

“While we were hoping she’d go early she was a bit on the baby side.

“I’m fairly hopeful we have a good class filly. I don’t know what we’ve got yet because you have to see them under race pressure.

“I know she has good gate speed and she’s more relaxed this time through.’’

The mare also has a rising two-year-old colt by I Am Invincible and foaled a Snitzel colt back in December.

Still Reigning made an inglorious first public appearance in a trial back in October, she ran right off the track after leading and finished last.

She bumped into Cellsabeel at her next trial less than two weeks later but didn’t appear again until early December where she won a Hawkesbury trial but showed Portelli she needed more time.

“When she went to Hawkesbury she nearly slipped over at the barriers and did everything you don’t want to see,’’ he said.

“We gave her a good spell and we gave her an easy trial the other day (April 17) and she just had a nice gallop.

The filly, $3.90 with TAB, drew barrier one for her debut at Warwick Farm and Jason Collett, who won the Silver Slipper on Time To Reign, rides.

Portelli said the plan is to make full use of that barrier and hopes she performs to a level that warrants heading to the Listed Woodlands Stakes (1100m) at Rosehill on May 16 – that race happened to be Rosina Kojonup's first outing back in 2018.

“From barrier one, with the speed she has, she will just take up the lead and hopefully she has the gears her brother and sister have got late,’’ he said.

“I’d like to go to the Woodlands and if she was to win that and get black type then $800,000 is probably money well spent.”

Still Reigning wins a trial at Warwick Farm on April 17

Meanwhile, Portelli said Time To Reign is currently back in work after all his plans for the autumn went out the window through another untimely virus.

There are no firm plans for the colt with Brisbane in the too hard basket due to regulations surrounding horse travel but Portelli is keen to see him get back on track in the coming months.

Time To Reign has only had the one start since last year’s Golden Slipper and he beat one home in a field of five at Flemington but was later found to have a respiratory problem.

“He’s been sick twice now. Every time I’ve got close to getting something going something has gone wrong,’’ he said.

“We’ll trial him and worry about a preparation when we see what comes out.

“We toyed with going to Brisbane but you’ve got to send them up there and leave them with someone else and when you have a valuable stallion proposition, and he’s not push-button, and you have to hand them over to someone else I’m not sure it’s a good idea.”