You get the impression that trainer John O’Shea believes a TAB Everest slot is all but sewn up for Lost And Running after the promising sprinter won the Vinery Luskin Star Stakes (1300m) at Rosehill with the arrogance you’d expect from a $1.40 favourite.

It might only be the middle of May but it could prove to be a significant Saturday as far as the make up of the field for this year’s $15m Randwick feature.

O’Shea would have got a glimpse of likely Everest rivals in Doomben 10,000 winner Eduardo and Goodwood placegetter Gytrash but the trainer of past gun sprinters Astern and Exosphere has never hid his admiration for Lost And Running and he isn’t about to start now.

“He’s the best sprinter I’ve ever trained,” O’Shea said after the four-year-old won his sixth race from seven starts.

“He has a tremendous record, to be fair he probably should be unbeaten.

“He’ll definitely be in the paddock on Monday and we would like to secure a position in the Everest with the view that we could concentrate on preparing him for that race.

“We had some lovely overtures before the race and I don’t think he would have disappointed anyone today. 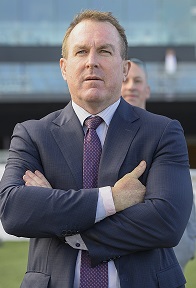 “Historically speaking if you win this race you run well in an Everest irrespective of the form. He ticks a lot of boxes, gets through wet ground, takes up a position and loves Randwick. He is a progressive horse on the way up.”

Trekking, Osborne Bulls and Clearly Innocent are all recent winners of the Luskin Star that have forced their way into Everest calculations.

“We’ll let the dust settle and see if (the slot holders) come back on Monday,” said O’Shea.

“If they were suitably impressed by what they saw there might be an opportunity to then concentrate on the job at hand.

“It’s all been about learning to execute his race plan, today he was on the downhill side of his preparation but was still good enough to beat them.

“Next time he comes back he’ll go into the Everest third up and peak on the day.

“You’ve seen how much he has improved from his first preparation into his second preparation and if he improves that much into his third preparation then he is going to be some chance.”

The son of American stallion Per Incanto gained another fan in jockey Tommy Berry, who although conceded that he was warming the saddle for James McDonald, might have put himself in the box seat to stick with Off And Running with McDonald unlikely to jump off Nature Strip.

“I loved him, he was there for me, everything I asked him to do he abided,” said Berry.

“He settled really well for me which is something he hasn’t done that well in the past so he has obviously matured a lot this preparation.

“James, John and the team have done a great job with him, I’m just the beneficiary today. I rode him in a piece of work on Tuesday and I was very confident after that.

“The soft ground took away his brilliance but I really liked that last 100m, when he got his toe in the ground, he put them away quite nicely.”

If there were any doubts about Eduardo running a strong 1200m at the top level, he put those to bed winning a high pressure running of the Doomben 10,000.

“He is a real fighter, it’s not often you see horses with that much speed have that much fight,” said Pride.

Meanwhile, Inglis remain in the box seat to lock in Gytrash for a second consecutive year after the five-year-old did enough first up having recovered from bone chip surgery.

TAB Fixed Odds firmed Off And Running from $21 into $13 while Eduardo remained a $15 chance with Gytrash easing slightly from $11 to $13.

Check out the results and replays from Rosehill on Saturday.