Irish trainer Michael O’Callaghan has taken a decent punt in sending the talented I Am Superman to Sydney for the inaugural $7.5m Golden Eagle.

I Am Superman is not guaranteed a start in the only race in Australia exclusively for four-year-olds as he sits around 20th in the order of entry allowing for unlikely runners.

While it seems he’s likely to squeeze into the 18 horse field it’s a sporting move from O’Callaghan with a horse that carries a 95 rating and is a $51 chance with TAB. 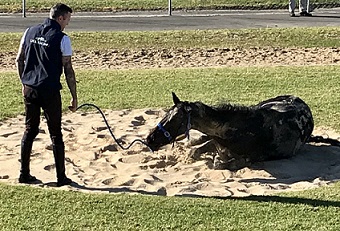 Irish galloper I Am Superman having a roll at Canterbury on Monday.

The colt’s groom and track rider John Bailey said I Am Superman only lost 10kg on the trip over and, given he’s only travelled as far as Ascot back home, he’s taken the experience in his stride.

“He’s a little bit quirky, he's a character who loves getting out there,’’ Bailey said.

“He trotted a lap then hacked a lap and half. He was looking at the birds and listening to the weird noises, he's settled in well and he seems to like it.

“That lets me know he's bounced back well.’’

While Everest day was in full swing on Saturday, I Am Superman arrived at Canterbury along with Richard Hannon’s Beat Le Bon and Aidan O’Brien’s Never No More and Antilles for their Sydney spring assignments.

Beat Le Bon and Never No More are both assured a start in the Golden Eagle while Antilles runs in the Rosehill Gold Cup (2000m).

I Am Superman ran sixth in the Group 1 2000 Guineas (1609m) at The Curragh back in May before a below par effort at Ascot in June but his two runs since encouraged O’Callaghan to make the journey.

At his last start he ran third behind Madhmoon in the Group 3 Desmond Stakes (1609m) at Leopardstown – Madhmoon had split Anthony Van Dyck and Japan in the Epsom Derby at his previous start.

“It's good form coming into the race. Hopefully we get in, we're a little down in the ballot,’’ Bailey said.

“Our tracks are pretty close at home, Naas is only 20 minutes from us an Leopardstown an hour. He's travelled to Ascot but a few things didn't go his way.’’

The back up plan for I Am Superman is to run in the $1m Redzel Stakes (1300m) on Golden Eagle Day if he doesn’t secure a start in the main event.

Beat Le Bon had a string of wins broken at his last start when he ran fifth of six at his stakes debut in the Group 2 Celebration Mile (1600m) at Goodwood on August 24.

His groom Wayne Kavanagh travelled with the horse on the flight and said he’s a horse that’s improving with racing.

“He was growing a lot as a two-year-old so his form hasn't come to light until this year,’’ Kavanagh said.

“He's won three big handicaps back home including the Golden Mile at Goodwood which is a very competitive race.

A double on the day for the @rhannonracing team at @Goodwood_Races as Pat Dobbs, clinging bravely to the rail, gets the gaps to come home first on Beat Le Bon#GloriousGoodwood #QGF pic.twitter.com/VkUnh2pooj

“He's a busy type of horse and can be a bit strong in the head so it's about keeping him relaxed and he seems to be doing that perfectly.’’

Kavanagh said there were excuses for Beat Le Bon at Goodwood last start.

“He's a horse that is suited by a strong pace and they went no pace and quickened up,’’ he said.

“Because he is a keen horse he needs a good pace, I've been watching racing here and they seem to go lickety split so that will suit him.’’

Jockey Tom Marquand, who summered with success in Sydney earlier this year, rode Beat Le Bon in five of his first six starts including his maiden win.

However, the four-year-old will be ridden in the Golden Eagle by Pat Dobbs who has been on board at his past four starts. Dobbs is expected to arrive in Sydney a few days before the race.