The finishing touches have gone on Aidan O'Brien's assault on the $7.5m Iron Jack Golden Eagle (1500m) with Never No More's final gallop on Wednesday morning pleasing the Coolmore camp.

Never No More did his usual canter around the Polytrack with stablemate Antilles before the pair worked solidly over 1000m on the course proper and hit the line together. 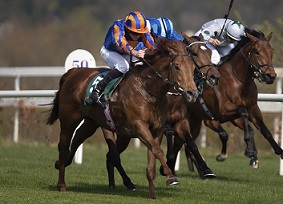 O'Brien's travelling foreman Andrew Murphy said the work has been done with the four-year-old and now it's up to the horse to perform at Rosehill on Saturday.

"It was a pipe opener, to open up his lungs, nothing serious but a nice bit of work to finish him off,'' Murphy said.

"He ran in an Arlington million after coming off a break, then ran second at Doncaster, these are runs he probably needed and we have him spot on now.''

The entire is a $26 chance with TAB in the inaugural Golden Eagle and Murphy said from barrier seven Never No More can be expected to be prominent.

"I would imagine the fact he's in gate seven he will go forward. You get a good gate you have to use it,'' he said.

"He goes on any ground, he's probably the ideal horse to bring here because no matter what the weather is he'll handle the ground.''

As for Antilles, who will run in the $500,000 Rosehill Gold Cup (2000m) with Leigh Roche in the saddle, Murphy said he's a professional horse with some compelling form lines.

Although Antilles has won just one race in 11 starts he ran a close fourth behind Constantinople over 2012m at The Curragh back in May.

"He's an absolute gentleman, he's ideal for what he's here for,'' Murphy said.

"He came as a companion and there happened to be a race.

"He can be ridden either way, as a two-year-old he made all over a mile or he can be held up. I'd imagine he wouldn't be too far off the pace.''

Both Richard Hannon's Beat Le Bon and Michael O'Callaghan's I Am Superman were given light gallops and they will have their final grass work on Thursday morning.

Hannon's foreman Wayne Kavanagh said Beat Le Bon is a horse 'on the upgrade' and is a very happy inmate at Canterbury.

"He doesn't do a lot of fast work at home because it will blow his head a bit so we keep a lid on him,'' he said.

"He's a horse that is still improving and that's why it's worth a shot coming here.''

Regular jockey Pat Dobbs will be in town to ride Beat Le Bon and Kavanagh said his presence in the saddle is key to the horse's chances.

Never No More (outside) and Antilles work at Canterbury ahead of Iron Jack #TheGoldenEagle 🦅 day this Saturday. @Ballydoyle @tabcomau @coolmorestud @7horseracing pic.twitter.com/zpKdYGZFYg

"Dobbsy knows hims well, he gets on well with him, and he's good at getting him relaxed and that is the key to him,'' he said.

"Hopefully he will run a good race, if he can cover his costs that will be a bonus.''

I Am Superman's trainer Michael O'Callaghan will be at Canterbury on Thursday to watch jockey Leigh Roche put him through his final gallop.

His foreman John Bailey said the horse is loving life at the quarantine centre.

"If he runs up to his form at home he should run very well. He hasn't raced against horses on this side of the world but on his home form he should be thereabouts.''