There’s always a lot of guess work when it comes to the early two-year-old races but trainer Mark Newnham has seen enough in his filly Every Rose to be confident what you saw in her trial is what you’ll get on race day. 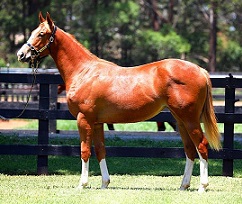 Every Rose makes her debut for Mark Newnham in the Gimcrack Stakes at Randwick. (Pic: Darby Racing)

Every Rose opened $2.90 favourite with TAB, Ashre Jahre a $15 chance, and Newnham said the early favourite is a readymade racehorse and barrier two gives her every hope to replicate her trial win.

“She’s a really natural two-year-old what she showed in the trial is what she does in her work,’’ he said.

“She jumped well in the trial, travelled nicely behind a hot speed and tracked into the race, quickened when asked, she did it like a horse that had done it 50 times before.

“I’ve worked her a couple of times with older horses and she's done the same thing, she’s been able to do it from day one.

“The official trials give you a good guide to what you’re going to get 12 days later and if she delivers that she is going to be hard to beat.’’

The Choisir filly, a half-sister to Academy and Smartedge, clocked 50.08 in winning her 847m heat at the official two-year-old trials on September 23.

Newnham said it’s unlikely Every Rose would be aimed at the $1m Golden Gift (1100m) at Rosehill next month given she’s a Magic Millions Ladies Syndicate filly and would be set for the Gold Coast.

Stablemate Ashra Jahre isn’t quite as forward as Every Rose, Newnham said, and will need a bit more luck from barrier 10.

In her trial the filly by Headwater hit the lead in the fastest of the 852m heats before finishing third.

“She had the lead early and the horse she shared the lead with dropped off early and it left her in front,’’ Newnham said.

“She has taken a bit of improvement from the other day and I think she will improve again.’’

Ashra Jahre is likely headed for the Inglis Banner in Melbourne later this month if she performs well.

Every Rose wins a trial at Randwick on September 23

Last year’s Victorian Oaks runner-up Greysful Glamour showed a return to form at her second start this spring with a gallant second behind Junipal two weeks ago and Newnham is hoping for another confidence booster on Saturday.

The grey, $4.80 with TAB, stays at the Randwick mile in the Gow Gates Handicap (1600m) and the trainer has a return to stakes company pencilled in later this month.

“There’s enough time to run her in good races but we need to see her get her confidence back,’’ he said.

“It was a good enough first-up run but good improvement second-up and comes back in the same grade. You’d be disappointed if it’s a race she couldn’t win.’’

Greysful Glamour could back up in the Group 3 Angst Stakes (1600m) on Saturday week if she e arns it this weekend.