Newnham Leaves Nothing To Chance For His Guineas Hero

Some time around the middle of Saturday afternoon don’t be surprised if you see vision of Mark Newnham and Josh Parr walking the Rosehill track.

It’ll probably be a race or two before the Group 1 $600,000 Sky Racing Active Rosehill Guineas (2000m) and it almost certainly won’t be the first time Newnham would have set foot on the track on Saturday. 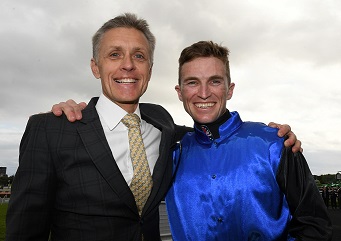 It’s all part of his way of plotting the best path for Shadow Hero to take the second leg of the three-year-old triple crown following his brilliant Randwick Guineas win two weeks ago.

“I did that before race one at Randwick the other day then I took Josh with me and went for another walk after race five,’’ Newnham said.

“We came up with what we wanted to do, he was able to execute it well, and the horse did the rest.

"There is plenty of time to look at the pattern of the day, then go out and walk the track. Josh has a great understanding of the horse and I have confidence in him and the horse.

“Once they step out there it’ll be up to the pair of them.’’

There’s plenty of reasons to be wary of what Rosehill might produce just seven days after copping a drenching and nine races on a deteriorating surface.

And then there’s the other variable – a lack of apparent tempo – for Newnham and Parr to consider.

“He’s never been endowed with a lot of gate speed, his first few strides he’s never been able to get forward, but at 2000m, depending on how he jumps, Josh will have a few decisions to make early,’’ Newnham said.

“There doesn’t look to be a lot of speed so he will have to make a decision in that first furlong where he positions him.

“It looks like a race where half a dozen horses will want to be running between third and sixth and there’s not room for all of them.’’

Nothing about Shadow Hero’s rise to challenge for the title of the nation’s best middle distance three-year-old has come as a surprise to Newnham.

In the spring we saw an entrée when he raced away with the Gloaming Stakes and Group 1 Spring Champion Stakes before rain on the day brought him undone in the Victoria Derby.

The gelding’s outstanding Randwick Guineas win, set up by the meticulous pre-race planning of Newnham and Parr, served notice the best is yet to come and that’s what Newnham believes too.

“I’ve had a pretty good opinion of him from the start,’’ he said.

“I sat down with his owner before his spring campaign and told him which races we were aiming at.

“I’ve ridden him a few times in work, before he raced and during each of his campaigns, and what he has shown me is coming out on race day.

“He has a great attitude for it, a terrific relaxed nature and a great stride on him. He has great lungs, he recovers quickly, and horses like that, when they have a great recovery rate like he has, they turn out to be very good.’’

Shadow Hero ran 33.73 for his last 600m to snatch the Randwick Guineas, one of only two horses to break 34 seconds in the race, and an 11.67 final 200m (Punter’s Intelligence) which was also clearly the race best.

The Rosehill Guineas has been a happy hunting ground for favourites in recent years, Shadow Hero at $3 with TAB is in line to be the fourth popular pick to win in the last five years, and Newnham sees no reason why he can’t continue on his way now he’s reached his pet trip.

“They are all hard races to win but I wouldn’t swap him for anything else in the race,’’ he said.

“So far everything has gone according to plan and third-up to 2000m looks tailor made for him.’’

Favouritism for the final leg of the triple crown, the Group 1 $2m Australian Derby (2400m) on April 4, will be sorted out in the Guineas with the top six in TAB betting, headed by Shadow Hero and Warning at $4.50, competing at Rosehill.