Hartnell is looking as well as he ever has and is bouncing around Godolphin’s Agnes Banks training base like a four-year-old.

Perhaps that’s why the eight-year-old will step into uncharted territory on Saturday, running over 1200m for the first time in his career in the $200,000 G2 Expressway Stakes (1200m) at Rosehill Gardens. He’ll face five classy rivals including stablemate Alizee, Trapeze Artist, Le Romain, Lanciato and Dothraki. 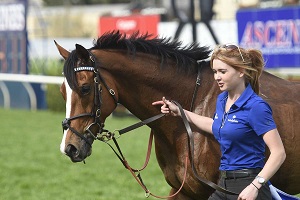 In Hartnell’s 46 starts, four of them being Group One wins, eight of them have been over 1400m but never below that distance.

“He resumes at an unlikely distance for him, but he’s going like a horse who can run a cheeky race,” said James Cummings.

“I was delighted with his barrier trial last week, he looks to have returned well and he gets into what looks like a barrier trial in a Group Two weight-for-age race. Look for him to be running on very strongly at the finish.

“They wouldn’t want to be laying down with him chasing them home.”

Meanwhile, Cummings is understandably chipper about Alizee after the four-year-old returned in devastating fashion in taking out the Christmas Classic at Randwick a month ago.

“She did that quite effortlessly and technically gave Fell Swoop two kilos,” he said.

“She’s done brilliantly between runs. She looked wonderful in her action in a trial since her last win.

“This is a competitive race but the small field will help her on her way before she steps up in distance.

“This is second up after a long time off, therefore the pressure is on her to reproduce the form.”

Godolphin also have a strong representation in the $160,000 G3 Widden Stakes (1100m) with fillies Avon River, runner up to Accession last time out, and Amercement, fourth to Catch Me in the Gimcrack Stakes back in September, wearing the royal blue silks.

“Avon River brings very solid two-year-old handicap form back to fillies’ company. She appears to have sharpened up with blinkers on and provided she relaxes well she can run a strong race in what is an important race for her.

“(Amercement’s) had a good grounding for this and has the scope to improve as she stretches out in distance.”

Hartnell is $12 with TAB Fixed Odds for the Expressway Stakes while Alizee is the odds on favourite at $1.80.