Nature's Owners Watching Everest Bid From Their Own Strip

Nature Strip’s managing owner Rod Lyons can’t wait to see his star sprinter return at Randwick on Saturday on his way to, hopefully, finally claiming the TAB Everest but he’s come to terms with the fact that he’ll be doing it from afar all spring. 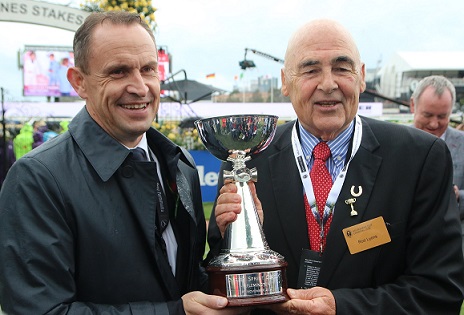 Lyons is based south of Mornington and is currently in week five of Stage 4 lockdowns due to the coronavirus outbreak but said, even if the situation improves rapidly as everyone hopes, making it to Sydney for the Everest will be too difficult.

It’s the same story for the bulk of Nature Strip’s owners, most based in Victoria and New Zealand, who are channelling their energy into organising how to experience the TAB Everest from outside NSW.

Bear in mind that this group owns the raging favourite for the $15 million sprint at Randwick on October 17 so you can imagine how much they’d love to be trackside to cheer him on.

“Thank goodness for racing continuing, without racing and the football we would be going nuts,’’ Lyons said.

“We missed the TJ, we had a real good jumper we couldn’t watch all season, it’ll be a tragedy we’re locked in here and can’t get up for The Everest.

“I’ve pretty much resigned myself to the fact we won’t be there. The guys from New Zealand have already booked out a pub there to get together for a celebration or a drown your sorrows type party.

“We’ve taken the same attitude but hopefully we can have some people around to the house.”

The question was posed to Lyons if he’d be prepared to travel to Sydney and undertake two weeks quarantine to be at Randwick on October 17 but doing that also means he’d have to put in another two weeks on returning home.

“We’re on 10 acres and we’ve been locked up for five weeks, if we locked ourselves together in a hotel room for 14 days one of us would be dead.”

The superstar six-year-old’s TAB Everest campaign commences in the Group 3 $160,000 TAB Concorde Stakes (1000m) where he’s widely expected to win and firm up his standing as the benchmark for the country’s richest race.

It's effectively Nature Strip's third Everest attempt, in 2018 he was selected by the ATC but failed in the Moir Stakes in the lead up and was spelled while he ran fourth in 2019 in James Harron's slot.

Since then his wins in the VRC Sprint and TJ Smith Stakes have elevated the gelding to the top of the sprinting ranks in Australia and internationally.

For the owners that all means while he might be a $1.35 chance on Saturday, he’s $2.60 with TAB in the Everest, with a reputation like Nature Strip’s - plus the public expectation - it doesn’t come without a bit of stress.

“It’s brought about because of the boom that’s on the horse,’’ Lyons said.

“Half the public love him and half hate him and there’s a stack I think out there hoping for him to fail.

“It’s a pretty important campaign. So that brings a bit of anxiety on you as an owner, we know we have a pretty good horse, it feels like a responsibility and you want him to perform at his best."

Trainer Chris Waller has spoken a number of times about getting it wrong with Nature Strip’s first-up run in the autumn, where he finished fourth behind Gytrash in the Lightning Stakes at Flemington.

He talks about not respecting the 1000m journey down the straight so has placed more emphasis on ensuring the gelding is tuned up and that’s been evident in his two barrier trial wins.

“We will have the breaks on but I don’t know if they will work.”

Nature Strip wins his second trial at Rosehill on August 18

Lyons said all the reports he’s received on Nature Strip’s preparation tell him it’s been a trouble free one and he hopes the work Waller, along with trackwork rider Stuart Williams and jockey James McDonald, has done to settle him will pay right off in the next two months.

That work could well be tested in the Concorde if Ball Of Muscle, a noted front-running speedster drawn barrier one, attempts to put Nature Strip out of his rhythm early and take up the running.

“I think he will go into the race fitter than he did first-up last time but we have to remember this isn’t his main goal,’’ Lyons said.

“There will be improvement in him but he will be going into the race fit enough to win.

“He gets a bit of white line fever, he’s as calm as can be in the mounting yard and going around to the barrier.

“As soon as he steps into the barrier it’s like when they bounce the ball or kick off in rugby, as soon as the whistle goes he seems to think ‘righto, I’ve got to go as fast as I can’.

“Hopefully with a bit of maturity the work they’ve done with him will shine through.”