It was the missing piece of the puzzle for Nature Strip. The TAB Everest.

Twice it had eluded him yet this time, he reigned supreme. 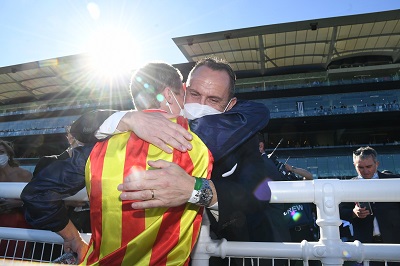 Saturday’s $15m feature at Randwick through up an early curve ball with Home Affairs spearing forward to find the fence forcing Eduardo into an unfamiliar trailing roll.

James McDonald rode his own race on Nature Strip, bowling along three-wide as if he was in a race of his own. In a way he was, in a way it’s the only way to ride the once maligned star.

There wasn’t a lot in the finish with Masked Crusader, who again stepped away slowly, charging home into second with Eduardo only 0.4L away in third.

“It is the only one that has been alluding him. He’s been a consistent performer all the way through. He is a grand final performer. That is what the trainer is, that is what the horse is and he’s done it today,” said McDonald.

“I’ve never woken up in the morning and been so confident, even though he’s just got there.

“The man who trains it is just an absolute master. I don’t know what he does, he’s just a freak of a trainer. The horse is a star.

“I knew we’d see something really good today. The build up has been so good. Everyone one has wiped him off having run in it three times and hasn’t done any good. It’s been different this time around. The horse gives his all.”

As Sweet Caroline was belted out by the exuberant 10,000 racing fans, McDonald was overcome. He later said that’d he’d never experienced a reception quite like it. Punters had their race track back and a favourite, that just lined their pockets, to cheer.

"Everything is too good to be true at the moment. The rain was dropping from the sky. When the track came up a Soft 5 I thought okay, but he’s so adaptable. The best sprinter in the world.

“I’ve been nervous on him before but not today.”

“It’s just a great race,” said an emotional Waller, “It’s captured the imagination of so many people, inside racing and out and what better way to get out of COVID.”

“I could feel it was a little bit different but when he crossed the line it certainly hit home that it’s a big race that’s taking over Australia.

“He is highest rating sprinter in the world for a reason and that gave me some confidence. He’s justified it today.”

Punters Intelligence reveals that it might have been the Everest that got away for Masked Crusader. His last 600m of 33.82s was near three lengths faster than the next best.

The defending champion Classique Legend ran near identical splits to Masked Crusader from the 600 to the 200m yet his face fitness gave out late.

Check out all of the replays and results from TAB Everest day at Randwick.