Kerrin McEvoy will take an open mind into his ride on TAB Everest contender Classique Legend in his winter cameo at Randwick on Saturday armed with the knowledge he’s on the best horse in the race. 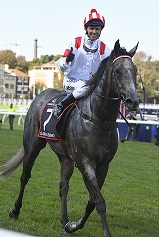 The argument that, given the grey’s owner Bon Ho has an Everest slot, there’s no incentive for Classique Legend to bring his A game to the Listed $150,000 Bob Charley AO Stakes (1100m) doesn’t fly with McEvoy who says he wants to see a winning return.

The four-year-old hasn’t raced since he finished unplaced in November's Golden Eagle, following an unlucky sixth in last year’s TAB Everest, but after a couple of months of preparation McEvoy said he’s fit enough to fire first-up.

“It’s a preparation to get the wheels back in motion and he’s by no means screwed right down but he’s ready to run.

“We go there trying to win and I’m confident he can run a great race. He's improved in everything he’s shown each time I’ve got on his back in the past couple of months.”

Classique Legend, early $2.60 favourite with TAB, looked a much chunkier horse when he stepped out for his only trial, an easy victory over 910m at Canterbury last week.

He’s been set a bit of a task from the outside alley but McEvoy said that’s the least of his concerns as there’s only the one turn to get around at the 1100m at Randwick.

“He’s definitely stronger, he’s had a nice time out to develop that bit more so that is going to bode well for his campaign moving forward,’’ he said.

“There’s a bit of speed drawn underneath me. He’s not slow (early) by any means this horse so it’ll be up to me to get him into a spot that can suit him given the tempo.

“If we get ground that is drying out is suits him even better.’’

Trainer Les Bridge said he’s likely to plot a similar path to the TAB Everest as he did last spring with races like the Group 2 Shorts (1100m) and Group 2 Premiere Stakes (1200m) on the radar.

All the way through that Everest campaign Bridge lamented he was a preparation away from being able to really mix it with the best sprinters in the land so is excited to be getting a second chance particularly with retirements meaning a new-look field is assured come October 17.

Of course Classique Legend was scheduled to leave Australia for Hong Kong but his owner had a change of mind due to travel difficulties and acquiring an Everest slot.

“When he left I didn’t think I’d see him again,’’ Bridge said.

“I’m still not sure exactly what happened but I’m just glad to have him back. I think he’s improved out of sight.

“In a perfect world he’d have been running in the TJ Smith, that didn’t happen. You’ve got to play the hand that is dealt to you.

“I wanted to give him a light preparation and then get on to having a go at the Everest.’’

Classique Legend, who has still only had eight starts, sits on the $15 line in all-in betting on the $15m TAB Everest and proof he’s returned in fine form would surely see him shorten.

Bridge echoed McEvoy’s sentiments about how Classique Legend has come up and said he’s there to be an ominous presence.

“If I didn’t bring him in now and do something with him it’d be almost 12 months between Everest and Everest and you can‘t win it like that,’’ Bridge said.

Classique Legend wins a trial at Canterbury on May 29

“He pulled up terrific from the trial and I think 1100m first-up is perfect for him.’’

Meanwhile, trainer John O’Shea is concerned that consistent galloper Southern Lad isn’t well served at the weights in the Bob Charley and that will make his job harder.

Southern Lad, placed in both runs this time in, is a $9.50 chance and will carry 53kg in the feature race but O’Shea feels the top weights are very well in with 60kg.

“He’s 2kg out of the rating so it is going to be a difficult scenario,’’ he said.

“He’s going well but as a result of Classique Legend, Jungle Edge and Tactical Advantage only getting 60kg those horses on the minimum have their work cut out for them.

“The thing with Southern Lad is I think he needs to get on drier ground. His two runs have been on heavy 10s so I think once he gets back on dry ground he will be more effective.’’