McEvoy Excited By Sun's Rise To 2000m In Guineas

Kerrin McEvoy is expecting superstar colt The Autumn Sun to relish the step up in distance at Rosehill on Saturday and hopes the extra ground will lead to a more conventional racing style. 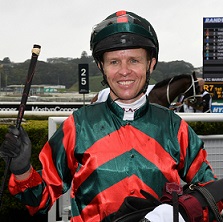 The champion jockey has been as taken aback as everybody by The Autumn Sun’s two crowd pleasing, come from behind, wins but concedes no matter how good a horse is they can’t continue to give away massive head starts and win every time.

“I am looking forward to seeing him over the trip,’’ McEvoy said.

“He's still got to tick that box but everything indicates that he's going to enjoy it.

“Remember he sat close in a Caulfield Guineas, he's not a horse that has to be giving that much start all the time.’’

McEvoy said the tempo of his two races this autumn has put the colt out of his comfort zone.

“They've been different sorts of races,’’ he said.

“They went steady early (at Randwick) then they flew along at the 1000m.

“I was caught between a rock and a hard place as to where I was positioned as the tempo was unfolding.

“He had to pull out a remarkable effort which he did. He’s a freak of a talent.’’

The Autumn Sun had a spin around Rosehill on Saturday morning and McEvoy reports the colt has come through the Guineas in A1 order.

His major gallop for the week will come on Tuesday.

Asked whether there’s been significant improvement since the Randwick Guineas, the jockey said all indications are that he has improved condition-wise.

“He's a hard one to gauge because he has such a good set of lungs on him,’’ he said.

“You'd like to think he's come on again. He seems to have come out of the run in really good order.

“It was just routine work on Saturday, we went out wide on the course proper and ran home in easy time.

“He was nice and bright and I'm pleased with how he felt.’’

If The Autumn Sun takes his record to eight wins from nine starts, as most will expect, the pressure will be on to give the colt the ultimate test against Winx in next month’s Queen Elizabeth Stakes (2000m).

Among McEvoy's other rides on Saturday are Redzel if he takes his place with top weight in the Group 1 The Galaxy (1100m), Godolphin filly Exhilarates in the $3.5m Longines Golden Slipper (1200m) and boom three-year-old Classique Legend in the Listed Darby Munro Stakes (1200m).

Check out the entries, form and replays for Golden Slipper Day at Rosehill on Saturday