There’s an air of confidence from jockey James McDonald that bonny mare I Am Serious is about to realise her Group 1 destiny at Rosehill Gardens on Saturday. 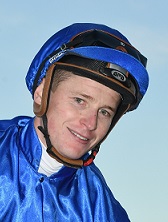 McDonald believes the five-year-old has reached the Group 1 $600,000 Coolmore Classic (1500m) at the right time of her preparation and career and, with a wet track likely, has conditions to suit her.

“She's very consistent, she'll never run a bad race so she has that going for her,’’ McDonald said.

I Am Serious only made her stakes debut back in August and the Coolmore will be her first attempt at the top level, in the toughest fillies and mares contest in the country.

But she signalled with a narrow defeat first-up in the Millie Fox (1300m) on February 23 she’s ready to win and has the second-up record to say it’s been the plan to capitalise on it in this race.

McDonald said I Am Serious probably cost herself the race first-up when she had to navigate some traffic and that meant she took longer to wind up than he would have liked.

“She just needed that run a little bit and she's come on really well,’’ McDonald said.

“She did hit a little flat spot but she appreciates around a mile. I worked her the other morning and she felt terrific.’’

I Am Serious was $5.50 favourite when the TAB final field market opened on Wednesday, McDonald hasn’t won a Coolmore while it’s one of just three Rosehill Group 1s trainer Chris Waller is yet to secure.

The others are the Golden Slipper and Storm Queen Stakes.

McDonald and Waller also combine with promising filly Verry Elleegant in the Group 2 $200,000 Chandon S Phar Lap Stakes (1500m) – the jockey won the race in 2012 as an apprentice while the trainer has provided three of the last four winners (Unforgotten, Foxplay and Winx).

Verry Elleegant, early $3.80 favourite with TAB, had her first run for Waller in the Vanity at Flemington a month ago, with McDonald in the saddle, and hit the line strongly to run second.

“She's a hard going filly and if she relaxed she'd be a very nice horse and give herself more of a chance,’’ McDonald said.

“I also rode her work the other day and she hasn't gone backwards, it's just whether the 1500m is too short for her.’’

McDonald is in an interesting position to talk about the ever changing two-year-old picture with the $3.5m Longines Golden Slipper (1200m) looming.

A week ago he’d have said Tassort was clearly the horse to beat but as he prepares to ride Athiri for Godolphin (Magic Night) and Cosmic Force for the Snowdens (Pago Pago) he has a very different view.

“At the moment if you run the Slipper 10 times you’d get 10 different results,’’ he said.

“I couldn’t label one but Athiri will run well and the give in the ground won’t hurt her.’’

Godolphin trainer James Cummings has indicated they’ll pay the late entry fee of $150,000 for Athiri if she pleases them on Saturday to add the last start Blue Diamond fourth-placegetter to their army of contenders.

All the fields, form and replays for Saturday's Coolmore Classic meeting at Rosehill