With another treble in the back pocket and one hand on a fourth premiership, James McDonald is revelling in the new normal for jockeys as he sets his sights on smashing his Sydney PB by the end of the season. 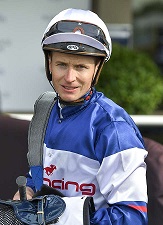 James McDonald is closing in on a century of winners this season. (Pic: Bradley Photos).

Last year McDonald became the first jockey since Darren Beadman in 2006-07 to post a century of metro winners in Sydney, ending on 104, and it's worth noting he only competed in one Sydney meeting over the months of June and July.

Of course, like he was 12 months ago, J-Mac would normally be riding interstate at this time of year and would have followed Everest favourite Nature Strip to the UK had the virus not struck but has found chasing that PB is a worthy stay at home pursuit.

“I want to get to 100 that’s for sure. Since we heard we couldn’t go to England or Queensland the 100 became my goal straight away.’’

McDonald moved to 88.5 wins with his Rosehill treble, 11.5 clear of Nash Rawiller, and despite being restricted to just Sydney since late March is closing in on the 100 in New South Wales (95.5).

He says the entire racing industry, particularly in NSW, should be proud of how it has dealt with the changes brought on by the COVID19 pandemic.

“NSW has handled it brilliantly, they went in hard early and put everything in place,’’ he said.

“And everyone has taken it all on board and done a remarkable job to keep us all going.

“It happened so quickly. All those protocols came into place, it was getting worse and worse overseas, and all sports were shutting down around us.

“One week went by and we were thinking it had to close down, we were preparing two weeks in advance and hoping the next week it’d still be on.

“We’re very much used to things now. It’s pretty much business as usual, we’re doing the job with the same intensity as we would with owners and crowds there.

"Sure, there are restrictions on travel and it’s a little disappointing we couldn’t get up to Queensland or England this year but we’re just lucky we were able to carry on.

"And Sydney racing is as strong as ever, it’s competitive as ever.’’

There’s 18 city meeting remaining this season and it’s likely, barring suspension, McDonald will be fronting up for most of them starting with six rides at Wednesday’s Kensington card.

He said he’s particularly keen to have a second look at the Peter and Paul Snowden colt Armatree in the Exceedance @ Vinery Handicap (1100m) after an eye-catching fourth on debut two weeks ago.

The colt ran fourth, narrowly missing second, behind Tommy Gold and McDonald expects him to improve with that run under his belt though would prefer a kinder barrier.

“Probably mentally he has a bit to come and he didn’t get all the favours last time he ran.

“I would have loved to see him get a better gate than he did just to offset a few little things he does do wrong but in saying that he can gallop.’’

Armatree runs fourth on debut at Kensington on May 20

McDonald suspects Rules Don’t Apply, who chases her maiden win in the Microphone @ Darley Handicap (1400m) is likely to post that first win this preparation after showing promising signs in her recent trial.

The Chris Waller-trained filly has had four starts for three placings, including a last start close second over 1900m in February, and won her only lead in trial a few weeks ago.

“She’s a nice off season sort of filly. Her trial surprised me a lot because I didn’t think she had as much speed as she showed in the 804m trial,’’ McDonald said.

“So that’s a good indication she has come back in good order and she’s in for a good prep because she handles wet ground.’’

And now that the Waller-trained Starla has broken through McDonald said it wouldn’t shock him if she goes on with it despite coming back in trip in the TAB Handicap (1100m).

The Snitzel filly won over 1300m at Warwick Farm back on May 13.

“She’s been racing consistently, she just got nabbed at Gosford and put in a strong win last start,’’ he said.

“We had to do a bit of work in the run and still got the job done. I’d expect her to go into the race with a bit of confidence and carry on the good form.’’

McDonald’s other rides are Accelerato (race 4), Donandkim (race 5) and he said he’s expecting Mantelli (race 6) to run well first-up if the Kensington track improves into Wednesday.

All the fields, form and replays for Wednesday's Kensington meeting