McDonald Eager For Some Group 1 Fun

When you look down his list of rides, champion jockey James McDonald is spoilt for choice in picking a standout on TAB Epsom day but it’s the emerging filly Funstar that has him most excited to be at Royal Randwick on Saturday. 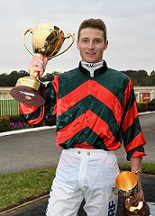 James McDonald after winning the Wyong Cup on Wu Gok, who he rides in the Metropolitan. (Pic: Steve Hart)

Of the three Group 1s on offer, McDonald is yet to win the $500,000 Darley Flight Stakes (1600m) so has a prime chance to correct that stat on the Chris Waller-trained three-year-old.

Funstar prevailed in an epic renewal of the Tea Rose Stakes (1400m) two weeks ago and McDonald knows he’ll have to fend off the Kiwi filly Probabeel once again to take out the Group 1.

“She was very gallant the other day, she wanted to win so it was grand.’’

Funstar was $1.85 favourite with TAB on Thursday in a race billed as virtually a two-horse battle between her and Probabeel despite a field of six lining up.

McDonald is well aware of the danger his major rival presents but says it’s not his style to go into a race looking over his shoulder.

“I’ll just ride the filly how she wants to be ridden and the rest will work itself out,’’ he said.

“I can’t focus on Probabeel because I’m not riding Probabeel. Barrier two is perfect for us and she’s bred to run the trip and further too.’’

Sydney’s premier rider won his first Group 1 $1m TAB Epsom (1600m) back in 2016 on the Godolphin galloper Hauraki, and was narrowly beaten on D'Argento last year, but he’s siding with his homeland on board Te Akau Shark in the spring mile feature.

McDonald said there was so much merit in Te Akau Shark’s second placing in the Tramway Stakes (1400m) at his Australian debut a month ago and has been impressed with the horse’s progress in the time since.

“It was a great run, he ran into a track where nothing made ground,’’ he said.

“Others that have been eye catchers from back in the field in that race have come out and won and he was the best of them so I’m looking forward to him.’’

It’s a good point McDonald makes – the likes of Kolding (Bill Ritchie) and Mister Sea Wolf (Shannon Stakes) finished behind the five-year-old in the Tramway then won feature races.

As far as the 16 barrier is concerned there won’t be any kneejerk reactions from McDonald.

“He’s a backmarker anyway. If I can get him into a spot, a nice enough position to win the race, great but he is one dimensional and will get back so it’s not much to worry about,’’ he said.

Godolphin also handed the 27-year-old a Metropolitan success in 2015 on Magic Hurricane, he rides Wyong Cup winner Wu Gok on Saturday – below are James McDonald’s comments on him and the rest of his Randwick rides.

Global Quest (Breeders’ Plate, $4.60): “He’s a really nice horse, straightforward, and it was a good trial win. He’s taking on a bit nippier sort of two-year-olds but he will run out the 1000m quite well.’’

Dealmaker (Gow Gates Handicap, $3.40): “He’s knocking at the door. He’ll race a lot closer and if he gets the breaks he’ll win. The barrier killed him last start, on a track that wasn’t suitable.’’

Funstar wins the Tea Rose Stakes at Randwick on September 21

Verry Elleegant (Hill Stakes, $2.80): "Her first run was not so good, the second run was a lot better with no luck. She was caught wide and she actually surprised me how well she boxed on.

“She’s going to have no excuses Saturday. She’s up to a trip where she’s coming into her own and that’s what she’s looking for. I think she is going well and she’s come back a notch so it gives her a chance to get back into the winner’s circle.’’

Wu Gok (Heineken 3 Metropolitan, $15): “He is a wet tracker, that Wyong track definitely had a little jar out of it. He’s going well enough to win it, whether he is good enough to win it we’ll find out.’’

Signore Fox (Snitzel Sprint, $5.50): “He’s going really well at home, the Snowdens have him ticking along. He went super in his trial. It’s a nice set up and I like the gate for him. Whatever he does on Saturday he’ll improve from but he’ll run well.’’