Marshall Leaving Nothing To Chance For Provincial Championships

Newcastle trainer Grant Marshall has long had a reluctance to spell mares when in peak form but there was no choice when Leave Me Some recorded her fifth win on her home track back in December. 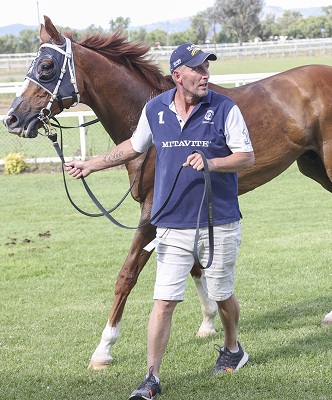 The carrot of a shot at the $500,000 Polytrack Provincial Championships Final is hard to pass up when you have a mare like Leave Me Some – consistent, honest and seemingly still on the way up.

Marshall will give the five-year-old her chance to reach next month’s final when she resumes in Saturday’s $150,000 Qualifier (1200m) at Gosford where a top three finish is needed to progress to the grand final.

“That’s the reason why she went to the paddock, so we could give her a little break and give her some pre training at Wauchope,’’ Marshall said.

“If they’re only going to have two weeks I’ll leave them at home but if they are going to spell they’ll head up there to Priscilla and Cassie Schmidt.”

If the mare’s name sounds familiar it’s probably because that last start Newcastle win came at the expense of a fairytale finish to Happy Clapper’s trainer Pat Webster’s career as she swept past Webster’s final runner Kosciusko to victory.

"I went up to Pat before the race and said 'I hope you win but if you don’t I hope we beat you'. She’s a good mare going somewhere,'' he said.

That win was preceded by a city placing at Canterbury and successive wins at Port Macquarie.

Marshall picked Leave Me Some out of a paddock at three, unbroken, and that goes a long way to explaining why she’s only had the 14 starts (for five wins and six placings) and is a rising six-year-old.

It took her six starts to win a maiden but, after some tweaking to her routine, she hasn’t looked back since.

“I rushed her a little bit early and she didn’t handle it, I was doing too much with her,’’ he said.

“So I eased off and just gave her a bit of work, gallop her every third time instead of second time. That’s what we did last prep.

“Where my stables are I had her in the back boxes and I’ve moved her to a front box where she can see everything and it’s just improved her.”

So it’s no surprise that Leave Me Some has been a work in progress and Marshall has spent a lot of time trying to teach her to settle and attack the line – as she did before a spell.

That explains why she was conservatively ridden in her recent barrier trial at Gosford on March 1.

Marshall has a couple of Filipino workers in the stable and one of them, Carlo (a chap called Christian is also in the team), has been Leave Me Some’s regular trackwork rider for several months while jockey Luke Rolls, who rides on Saturday, has been instrumental in her preparation as well.

Leave Me Some wins at Newcastle on December 5

“I had Luke Rolls on her in the trial because he knows her more, he pre-trains and does a lot with her, and she seems to settle better,’’ he said.

“If you race the speed with her she doesn’t find the line, you’re better off letting her do her own thing and have one go at them.

“I think she’s right to run in the top three, it’s just a matter of where she gets to in running. She’ll be midfield, probably a little bit worse.”

So far six horses have qualified for the $500,000 Polytrack Provincial Championships Final (1400m) at Randwick on April 10, after Gosford the remaining heats are at Kembla Grange (March 20) and Wyong (March 27).

All the entries, form and replays for Saturday's Provincial Championships meeting at Gosford