English jockey Tom Marquand is making good on his promise to return to Sydney and will kick off another six-week stint at Randwick on Saturday. 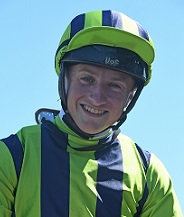 He's long had a reputation as a rising star of UK racing and describes his time in the Harbour City last summer as ‘pivotal’ in arming him with skills that have made 2019 his best year in the saddle to date.

After arriving last year as a virtual unknown it’s a different scenario for Marquand, 21, when he has his first Sydney rides in 11 months at the Kensington meeting and he hopes he can hit the ground running.

“It took two or three weeks to get that bit of momentum up last time, hopefully this time people will know my name.

“I was lucky to ride few winners for a few different trainers last time so I hope that can come into play.

“I’m coming with the view to trial and ride for as many different people as I can.’’

Marquand will again be based with Randwick trainer John O’Shea who was instrumental in bringing him to Sydney a year ago having won the UK champion apprentice title.

He made quite an impact in a seven week stay, riding six city winners, and at his last meeting in Sydney, on Inglis Millennium day at Warwick Farm in February, he fell less than half a length short of capping the trip with a Group 3 win, riding Purple Sector into second in the Eskimo Prince Stakes.

Since we last saw Marquand his star has risen further in the UK.

He’s posted 133 winners for the year including a couple of Group 3s in the UK and France and a string of Listed wins plus a successful recent trip to Qatar.

“This year has been unreal at home, it far exceeded my expectations,’’ he said.

“The quality of horses this year have skyrocketed from last year. It’s been a progressive year.

“Everything happens a lot faster in Australia, I learnt a lot about tempo of races and pace awareness and that split second decision as they start to quicken definitely proved the difference on quite a few horses throughout the summer on the turf.

“Other people are riding British tempo and letting a race develop but bringing a different approach to it on different horses helped a lot.’’

It's also been a huge 12 months personally as his partner Hollie Doyle, another emerging star hoop, broke the record for UK wins by a female jockey.

Pablo Escobarr (Galileo) is a smart colt and lands Listed honours in tonight's £45,000 feature for William Haggas and @TomMarquand at @kemptonparkrace pic.twitter.com/oA6YY7QSDn

Unfortunately, Doyle won't be joining him in Sydney but he says she has plenty of riding opportunities to keep her busy at home.

Before he arrives, Marquand is breaking up the trip by riding Pablo Escobarr for William Haggas in Dubai on Thursday.

He said he would have travelled down under just after Christmas but was keen to retain the ride on the Galileo colt after winning a Listed race at Kempton early in December.

Tom Marquand will again be managed by Shaun Flaherty while in Sydney and among his early bookings is the unbeaten Jean Dubois three-year-old Thanks To You, due to run in a 1300m Benchmark 72.