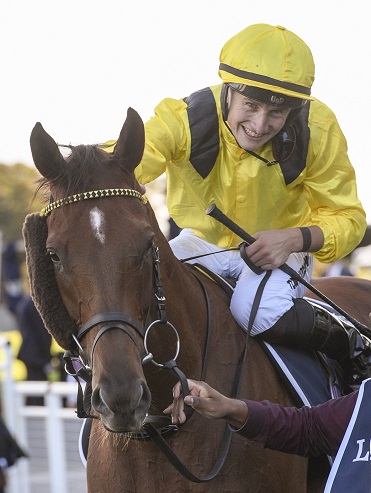 It seems a first-up defeat and the view the Randwick track won’t favour the UK visitor this year doesn’t faze Marquand who says he “won’t give tactics a tonne of thought” or be forced into any particular role in the race.

The Queen Elizabeth changed complexion a little with the scratching of the expected leader Samadoubt and that leaves everyone anticipating Marqand setting the tempo.

“You can go so much into tactics but ultimately last year come the Queen Elizabeth nothing would have beaten him that day no matter what anyone tried to do,’’ Marquand said.

“I’m lucky he’s a chilled out horse and I can ride him according to how the race is being run.

“He won a Group 1 last year by making his own running, he’s won good races coming from behind.

“Everyone here sees him as a one trick pony because I’ve always been pretty forward on him but ultimately if the pace is right I don’t have to be.”

What Addeybb doesn’t have in 2021 is a Ranvet Stakes victory alongside his name after he was outpointed by great rival Verry Elleegant at Rosehill on Golden Slipper Day.

The William Haggas camp has the same view of the Ranvet as it did last year, that the race is there to prepare Addeybb for the Queen Elizabeth, but there’s no denying his defeat in that race raised the question of whether he’s going as well.

Marquand points out Addeybb has a history of improving significantly with a run under his belt – last year he won the Ranvet by half a length before beating Verry Elleegant by almost three lengths at Randwick.

“Last year he did it twice, he did it here and when he got back home,’’ he said.

“He went from winning a Listed race at Ayr by half a length to winning a Champion Stakes by three lengths demolishing world class horses.

“He probably just needed that run to tune him right up.

“It was a run to get him ready for his big race, that’s the Queen Elizabeth, and while you walk away disappointed because you haven’t won a Group 1 when you think you might ultimately it’s leading into a bigger day.”

A major difference in Addeybb’s look in the Queen Elizabeth will be the addition of blinkers.

It’ll be the first time the seven-year-old, who normally races in winkers or what the British call cheek pieces, has sported the shades and Marquand said it’s not really a significant change but one that potentially could provide a small edge on a good to soft track.

“My view from riding him is he’s not going to over race and if it will carry me an extra 100m into the race, especially the way races are run here, it’d be wonderful,’’ he said.

“At Ascot it doesn’t matter if you come off the bridle at the three pole (600m) because you’ve got all that time to build them up.

“He cantered in them and felt great, they’ve not changed him as a horse, it’s not a drastic change and it’s worth a shot on D-Day.

“We’d love to have a wet track but it’s not looking likely. I’m hopeful there is a bit of moisture in the ground just to ease it a touch.

“We have heavy dews in the morning and the temperatures have dropped a bit, so hopefully it’s not rock hard and we can get away with it.”

Addeybb runs second in the Ranvet Stakes at Rosehill

Marquand leaves for the UK on Sunday but said he’s keen to continue returning to Australia – of course if travel becomes easier in future with the COVID-19 situation - and will likely entice his partner, UK superstar Hollie Doyle, to join him at least once.

“It’s something I hope I can work into my year for the foreseeable future and do a few months each year,’’ he said.

“Australia lines up so well with everything at home. This year if I could have travelled freely I’d have come over here January or February.

“Then I could nip back to Dubai if international horses had gone there, obviously Saudi is getting bigger and bigger. Also Bahrain and Qatar.

“All the middle east countries are accessible from Australia. I enjoy travelling so as long as I can jump on a plane and get somewhere I’ll happily be down here and have it as a base instead of home for a couple of months a year.”

All the fields, form and replays for Day 2 of The Star Championships at Royal Randwick on Saturday