The emerging superstar UK jockey not only masterminded Addeybb’s successful defence of the Group 1 $4m Longines Queen Elizbeth Stakes (2000m) on the track but off it as well. 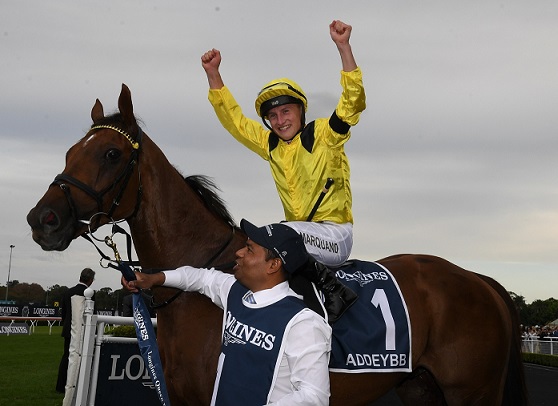 His trainer William Haggas, speaking to SEN’s Andrew Bensley shortly after the race, heaped praise on the 23-year-old hoop for his advice in adding the blinkers to Addeybb’s gear following his Ranvet Stakes defeat and is convinced they did the trick.

“I personally want to thank Tom for going for the blinkers because I wasn’t sure,” Haggas said.

“That’s what you employ top people for and that was his advice. So good on him.”

Marquand endured the two weeks of hotel quarantine under the COVID-19 rules to ride in Sydney this autumn and it was all for Addeybb.

No other result through the carnival was as crucial.

“You can’t put it into words what he’s managed to do this horse,” Marquand said.

“He’s done it down here, he’s done it back home, and honestly I’m the most privileged person.

“Four or five years ago if you’d said I’d have a horse like him, I’m completely blessed and count myself extremely lucky.”

It’s fair to say the race didn’t go to anyone’s script. Not Marquand’s and certainly not James McDonald’s on Verry Elleegant, Addeybb’s great rival, as a slow start turned the race on its head.

Marquand had said all week that if Addeybb was on song he wouldn’t be beaten and he also said he’s not a one trick pony that needs to lead to win. Well, he was proven right on both counts.

Addeybb worked around the field gradually in the run and while he tracked wide he put McDonald on Verry Elleegant on the back foot and the mare over-raced and threw her head around akin to how she was a couple of years back.

She made her move before the home turn but unlike the same moment in the Ranvet Stakes three weeks earlier Addeybb had more to give and he fought off her challenge with early leader Dalasan holding on for third.

“From the 400m as they were coming to him he gave me the same feel as last year,” Marquand said.

“I know I said he wasn’t 100 per cent square in the Ranvet and a lot of people would have said Verry Elleegant was better this year but I just couldn’t help but think it wasn’t him.

“He proved when he’s on song he just gives you a different feel. He’s a monster, in his element he just flows.

“I would have loved to win by three lengths only having to tap him behind the saddle once but that’s just not him. You have to rough him up a bit and I think he is the epitome of an English racehorse and today he was just exceptional.”

Marquand said he’s keen to return in 2022 to attempt a threepeat and hopes Haggas will finally be able to make the trip down under.

The horse will return home in the coming week for the English flat season and all going well be back with his trainer in tow.

“It was a marvellous, magic, moment really,’’ Haggas said.

“I couldn’t really watch until the last couple of furlongs and then it was great. I remember thinking about 200m to go he’s not going to let them past.

“We have the perfect horse for this. Honestly, I keep saying it but it was a pleasure to be involved with your carnival.”