Addeybb versus Verry Elleegant – it’s the rivalry racing needs to tell the world about and jockey Tom Marquand can't wait to take his front row seat when the international heavyweights clash this autumn.

Tom Marquand at Canterbury on Wednesday.

Marquand, speaking at the Canterbury Quarantine Centre on Wednesday as he cast his eye over Addeybb for the first time in almost a month, has a 2-0 scoreline on his side from the results of 2020 but it’s clear the star UK jockey has a healthy respect for the Kiwi bred Aussie mare.

“It’s a competitive sport and they are top athletes, that’s the way racing people look at it, and who doesn’t want two world class athletes coming together on the final day when it matters.

“I’d rather win by three lengths and find it easy but that’s probably unrealistic looking at Verry Elleegant’s form in the last year.

“I’m looking forward to it, hopefully everything can go smoothly over the next two weeks until his first run.”

The seven-year-old touched down in Sydney on Monday night, along with stablemate Favorite Moon, as the highest rated horse in training in the world and with that comes the assumption that he’s the horse to beat in whatever he contests.

Addeybb has raced three times back in England since he beat Verry Elleegant by half a length in the Ranvet and by almost three lengths in the Queen Elizabeth last year, highlighted by a Group 1 win at Ascot in the Champion Stakes (2004m) on October 17.

“I had to pinch myself a little bit when the ratings came out,’’ Marquand said. 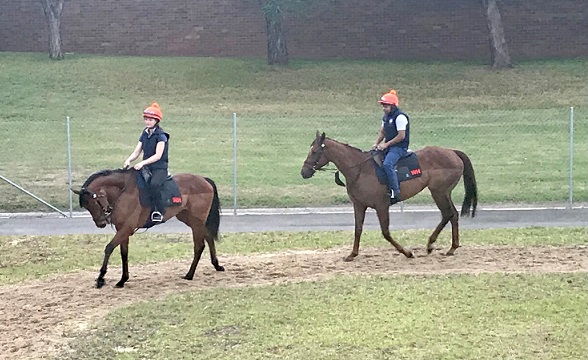 Favorite Moon (front) and Addeybb at Canterbury on Wednesday.

“He’s getting on in his days now but for whatever reason he just seems to keep taking a step forward for each year he has under his belt. I jumped on him before he left and he felt great.

“Expectation is going to come with success. The second time around at least you half know what to expect.”

TAB’s all-in market for the Ranvet Stakes has Addeybb at $2.30 and Verry Elleegant at $3.50 while in the Queen Elizabeth the gap is wider at $3.50 and $6 respectively.

Isabella Paul is trainer William Haggas’ representative in Sydney this year with ex-foreman Harry Eustace training in his own right now but Addeybb’s handler Safid Alam has once again made the trip to tend to his favourite horse.

Paul is a graduate of the Godolphin Flying Start program and has worked for the trainer for about a year.

She said to her eye Addeybb and Favorite Moon travelled well, in Addeybb’s case perhaps better than last year, and arrived very forward in condition.

“They are both eating up, their temperatures are good and their weight is good. Addeybb obviously did the trip last year but Favorite Moon hasn’t done anything like this before so I was a little worried he might not travel as well but he looks great.

“We can afford to give them a couple of easy days now and then pick them up in the coming week.”

Isabella Paul is in Sydney for trainer William Haggas.

Because the duo arrived in such good shape Paul said they’ll likely hit the Polytrack on Thursday then transition to the grass on Friday but serious work won’t commence until next week.

While we all know plenty about Addeybb, what about his companion Favorite Moon?

There’ll be plenty of attention on the four-year-old after Haggas brought Young Rascal to Sydney last year, that horse managed to beat Mugatoo in the Manion Cup and that’s the race Favorite Moon is likely to appear in at Rosehill.

He’s only had eight starts, for two wins and, unlike Young Rascal, hasn’t yet been tried in stakes company.

“The two times he won at Haydock he was impressive and then he’s had a couple of flat spots. He’s never run right-handed so we’ll see how he gets to grips with that.

“He’ll be progressive and he should come on massively this year, he’s clearly very talented and we need to find what makes him tick.”