With seven winners (14%) and a further 16 top four placings (46%) from his past 50 runners, local Gosford trainer Luke Hilton is looking to continue his consistent run of form on his home surface this Thursday.

Hilton gets the ball rolling with In The Zone in the Campbells Timber And Hardware Provincial And Country Maiden Plate over 1100m with the Not A Single Doubt gelding having just his third start for the stable. 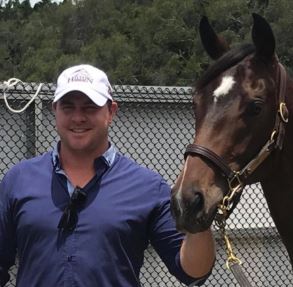 The five-year-old comes into the event following two thereabouts runs at Lismore and Moruya, and has the services of in-form hoop Adam Hyeronimus from gate three.

“Both runs for us have been really good,” Hilton said.

“He probably didn’t quite get the 1200m last start, let alone on the heavy track, but Adam won a trial on him and has a bit of an opinion.”

Hilton then lines up Monsieur Macron in the Midcoast Timber Benchmark 64 Handicap over 1100m, another horse new to the stable.

The five-year-old Swiss Ace gelding has had only one start for the Hilton camp, being formerly trained by Marc Conners at Warwick Farm.

“We purchased him as a tried horse and we are still trying to learn a bit about him to be honest,” Hilton said. “We’ll race him at home and learn some more and hopefully Adam can give us a good guide moving forward.”

Hilton wraps up the card with another newly-inherited galloper Buckle Up Baby in the MBA Central Coast Division Class 2 Handicap over 1000m. This will be the Star Witness mare’s first run for Hilton, previously being under the care of David Pfieffer.

“She’s a really nice mare and was only beaten about five lengths in a Group 3 race earlier this year,” Hilton said.

“She likes Gosford and won her maiden here. The 1000m may be a bit too slick for her but she definitely gets in well at the weights.”

Looking forward to Saturday and Hilton has his two-year-old filly Undeniable up and going early being nominated for both the Gimcrack Stakes at Randwick and the Maribyrnong Trial at Flemington.

When quizzed about where she would head, Hilton will be closely looking at acceptances on Wednesday.

“We’ll have a chat and see where we go,” Hilton said. “There are only eight nominations at Flemington so if the race drops off a little you may only have to beat a few home to get some black type.

"We had a runner (Last Chance Dance) in last year’s Gimcrack and we’ve certainly learned a lot from that experience.”

Gates open at 12pm with the first race scheduled for 1.10pm.