The only long term plan trainer Richard Litt has in mind for exciting youngster Castelvecchio is an eye on a three-year-old classic.

He may make it to a Golden Slipper or another Group 1 feature through the autumn but Litt feels the unbeaten colt is an ideal Derby type for next season. 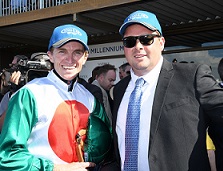 But that’s next season and for now Litt is happy to put the unbeaten record on the line in the Group 2 $200,000 Schweppes Skyline Stakes (1200m) at Randwick on Saturday and see what he can do on a big track.

“His three-year-old career will be his main aim, everything he does in this campaign is a bonus,’’ Litt said.

“I think he is a Derby horse. He’s quite brilliant over the shorter distances now, I hope I’m right.

A decent sprint is something Castelvecchio has been able to produce on two occasions, his debut win at Canterbury then an outstanding performance to claim the $2m Inglis Millennium (1200m) at Warwick Farm earlier this month.

Punter’s Intelligence data showed Castelvecchio was clearly superior to his rivals at the Farm, covering an extra 15m and running his last 600m in 35.90 which was 0.69 faster than any other runner.

Litt concedes it’s not easy for a horse to consistently come from last and round up his rivals, at any level, especially as we get to the business end of the two-year-old season.

This time he has just seven rivals and the open stretches of Randwick in his favour.

“We’ll never change anything at this stage,’’ he said.

“There’s no pressure to ride him more forward, it’s important for him to relax and switch off so he has that turn of foot.

“Eventually once he learns to race he’ll travel a lot better than he does and probably will be a couple of lengths closer.’’

If a Golden Slipper were to be in the back of Litt’s mind, and the colt’s owners, he’d need to win the Skyline to ensure he has enough prizemoney to qualify.

Despite winning a $2m race last start and his earnings sitting at $1.22m the bulk of that money is not eligible as far as the order of entry is concerned due to the Millennium’s restricted status.

“It’s just one race at a time, the Skyline is the next step for him and we’ll see how he comes through that,’’ Litt said.

“There’s no pressure for a Slipper or even a Sires. He’s a nice horse and he really put them away the other day so, who knows, we’re just looking forward to the next one and hopefully he can do it again.’’

Castelvecchio wins the Inglis Millennium at Warwick Farm on February 9

Litt said since Castelvecchio’s emotional Millennium win it’s been business as usual around the stable but with a bit of spring in the step.

The horse has enjoyed a casual week, Litt says they haven’t done a heap of work with him in the lead-up to Saturday, and he will be nice and fresh for the Skyline.

So far he’s started $61 and $21 on race day so he’s in an unusual place opening one of the Skyline favourites at $4 with TAB though Litt suspects he may be shorter if a ‘bigger name’ was against his in the race book.

“He’ll always be underestimated because he’s trained by me. But that’s good, we like flying under the radar,’’ he said.

“We’ll let the horse do the talking.’’

As far as the Skyline as a Slipper lead-up is concerned it's been 15 years since a horse took out both races (Dance Hero in 2004).