Trainer Les Bridge is planning to mirror his successful 2020 TAB Everest campaign with reigning champ Classique Legend now the star sprinter is back on Australian turf. 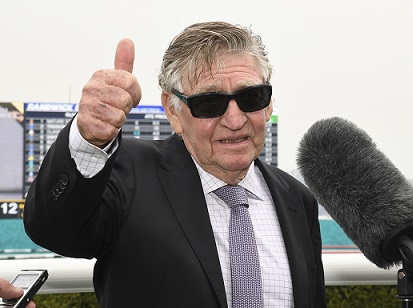 The grey arrived at Bridge’s Randwick stable about 10.30pm on Tuesday and when he took a good look once day broke on Wednesday the Hall Of Fame trainer had an air of confidence about matching the result of last year.

Classique Legend’s return from Hong Kong wasn’t a simple one as he, along with fellow returnee Shadow Hero, had to go via New Zealand and spend two weeks there – something Bridge believes the horse relished – before being allowed into Sydney.

Bridge told Andrew Bensley on SEN on Wednesday morning the gelding lost a bit of weight in transit but otherwise looks in fine fettle.

“We just made sure he was okay, we had a good look at him this morning and he had a walk and a pick,’’ Bridge said.

“It’ll probably take him a day or two to pick up. He knows he’s home, don’t worry about that, he’s back in his old yard. He knows.

“He has a yard that faces out onto the track, he can see everything, he just likes it, he’s always been in there, and the results have been good so we’re not going to change that.”

The five-year-old had just one start in Hong Kong under trainer Caspar Fownes and finished 11th in the Hong Kong Sprint (1200m) in December.

He was building up towards some autumn targets in March, winning two barrier trials, when he was found to have bled following a trackwork gallop and the decision was made to send him back to Australia to give him every chance to defend his Everest crown.

Bridge said he plans to let the dust settle for a couple of weeks and will follow the same spring program as a year ago which includes the Group 2 Shorts (1100m) and the Group 2 Premiere Stakes (1200m) prior to the $15m TAB Everest on October 16.

"With the time I’ve got, he’s in a lovely yard that he likes and I can give him some light work for two or three weeks to let him adjust then go on and train him for the Everest,’’ he said.

“He’ll have one barrier trial, maybe two, it all depends how he’s going.

“I have had a lot of good horses and I can tell you now if I can get him into the same form as I had him last year we will get the same result. That’s the trick, to get him back into that form again.

“I’ve never gone into a race like that so confident. Let’s hope I’m confident this year but I’ll know as we go along how he’s going.”

Meanwhile, Mark Newnham said on SEN he’ll give Shadow Hero a short break before deciding what part the two-time Group 1 winner plays in the spring.

Shadow Hero’s last Australian start was a fourth in the 2020 ATC Derby and in five starts with David Hayes in Hong Kong he managed two third placings and beat only two horses home in the Hong Kong Derby (2000m).

“I was pretty excited to have a look at him and he was happy to be here too,’’ Newnham said.

“He likes being in the stable and he likes the routine of our stable so I don’t think it’ll be too much of an adjustment for him.”

Newnham said the gelding has a healthy coat and is sound but isn’t in a big rush to get him back to the track. He said generally he doesn’t take a lot of work to get fit so that opens up major spring targets if he is ready in time.

“With the amount of races we have now in NSW, especially worth plenty of money, we won’t be lacking opportunities with him,’’ he said.

“There might be a couple of spring targets for him but if that doesn’t work out he could always go towards The Gong or the Villiers then chime into early autumn.”