Game Of Thorns surprised trainer Kris Lees first-up from a spell but another slashing display from his improving filly in Friday’s Group 3 Carlton Draught Kembla Grange Classic (1600m) would come as no shock.

The classy daughter of Animal Kingdom will help make up a full field of 16 runners for the Illawarra Turf Club’s black type fillies feature. 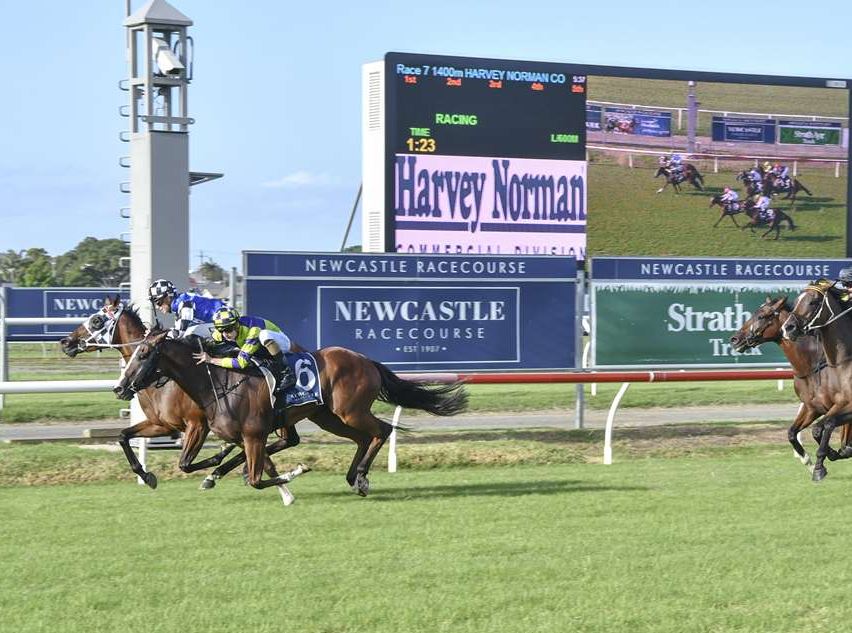 Game of Thorns (Louise Day; blue, black & white) gets up on the inside to defeat Café Royal (Koby Jennings) at Newcastle. Image by Bradley Photographers

Game Of Thorns ($9.5 on TAB fixed odds) heads to Kembla in top form after an impressive first-up victory on her home track in Newcastle over an unsuitable 1400m trip. It's boosted Lees's confidence as he chases his first win in Kembla's $200,000 mile.

"She was brilliant first-up,” Lees said. “It was looking ugly during the run but she will be ridden similar.

“I was surprised by how well she reacted over the shorter course. It was pleasing to see and she's come on from that."

Game Of Thorns did need a slice of luck to get the win after a pilot error (rider suspended for dropping his hands) on Café Royal close to the line allowed Lees’s filly to round out the leader. However, it was the manner of the performance that most impressed Lees.

Newcastle’s leading trainer has long had a decent opinion of his filly and has twice tested her in stakes grade already.

Game Of Thorns finished fourth in a Listed Winning Edge Stakes (1400m) at Eagle Farm as a two-year-old and runner-up to Asiago in the Group 3 Spring Stakes (1600m) at Newcastle last November.

“It is a big jump in grade but she is stakes-placed already so she will run well,” Lees said.

“The Australian Oaks is the target and she is bred to get over that sort of trip but fillies you just don’t know where they might plateau distance wise.

“I think she will certainly be suited at 2000m so we will see after that if she is suited to heading towards the Oaks.”

Lees has booked Tim Clark to ride Game Of Thorns, who will look to go back from a tough wide draw in barrier 14.

Lees will have the option of heading to the Group 1 Vinery Stud Stakes (2000m) at Rosehill on March 28 or the Group 3 Adrian Knox Stakes (2000m) if Game Of Thorns progresses through Friday’s run.

The Kembla Grange Classic has attracted one of the most competitive fields in years with Chris Waller, Peter and Paul Snowden, James Cummings holding the leading hopes.

Co-trainers Gai Waterhouse and Adrian Bott have three runners nominated for the Kembla Grange Classic and Bott confirmed plans to start Dorothy Of Oz ($26), Shout The Bar ($18) and Pierro Rose ($61) in the race.

By Neil Evans Track Good 4 and rail out 6m from 1400m to Winning Post and True the remainder Race ...
Read More