Champion trainer John Hawkes has long said he judges a horse on their second start not their first and that view applies to promising three-year-old Kapajack. 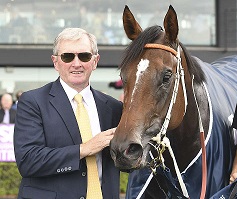 The gelding achieved a rarely attempted feat of winning a Benchmark 78 on debut earlier this month and it stamped him as an emerging talent.

But that achievement will mean little to Hawkes if he doesn’t back it up in the TAB Handicap (1300m) at Warwick Farm on Saturday.

“Plenty can do it once but when they do it twice that’s when you know you have a reasonable horse.’’

The Hall Of Fame trainer said they could easily have picked out a maiden for Kapajack’s debut but he’d shown more than enough to be tested against more experienced rivals.

He was a $17 chance in that Rosehill win on December 1 but there’ll be no such luxurious prices for start number two as the $3.90 favourite with TAB.

The data from Punters Intelligence paints the picture of an above average horse who was able, on debut, to run faster time than the Listed feature over the same distance, a last 600m of 33.05 and the fastest last 200m of the day of 11.05.

Hawkes said Kapajack, likely bound for the Magic Millions next month, faces a bigger test on Saturday rising 2kg (after Brock Ryan’s claim), 200m, and jumping from an awkward alley.

“He’s always shown us nice ability. There are a few minuses but he’s a nice horse and couldn’t do more than he did,’’ Hawkes said.

“Plenty of horses have minuses and still win, it doesn’t stop them winning, but this is just a tougher assignment. He will be competitive with the right run in the race.’’

There’s plenty of form around easy last start Warwick Farm winner Heart Conquered to suggest he can go back-to-back in the Summer Racing Handicap (1000m) where he’s the $3.40 favourite with TAB.

Hawkes sees the race as a challenge for the three-year-old, who accounted for Sikhing Glory and Deprive on November 28, if Warwick Farm dries out.

“He’s in his right class and he likes soft tracks. If it is a drier track it’s a tougher race but he’s in the mix and will be competitive,’’ he said.

Kapajack wins on debut at Rosehill on December 1

In-form four-year-old C’est Davinchi chases a hat-trick in the Events By ATC Handicap (1600m) and Hawkes expects both he and stablemate Intueri to feature.

C’est Davinchi took until start eight to break his maiden but handled the class rise with ease at Canterbury on November 30.

“He’s down in weight and it is a mile, which is probably as far as he likes to go. He races well at Canterbury and he has to bring that to Warwick Farm.

“Intueri is an honest horse and he races well at Warwick Farm.’’

Golden Slipper winner Estijaab will return to the Hawkes stable at Rosehill soon and all eyes will be on how she comes through a tie back operation.

The filly missed the spring and Hawkes said the stable is hopfeful she can be a player in the autumn carnival but isn’t putting any pressure on her yet.

“Hopefully she will come back but when they have throat operations you never know,’’ he said.

“Until she gets back to the races you’re only guessing. It’s a long way to the autumn, we’re not rushing and just taking small steps.’’

All the fields, form and replays for Saturday's meeting at Warwick Farm