Irish jockey Oisin Orr didn’t take a lot of convincing to skip the winter back home for a three month Australian summer stint under the guidance of champion trainer Chris Waller.

The 22-year-old, twice Champion Apprentice in Ireland, makes his Sydney debut with rides at Canterbury on Friday night and Rosehill on Saturday having spent just over a week getting acclimatised and slotting into the Waller machine. 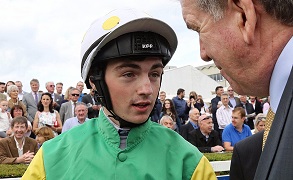 Orr has struck up a strong association with champion Irish trainer Dermot Weld who provided him with his first stakes successes earlier this year and was the driving force behind the Sydney trip.

“Dermot Weld asked me if I’d like to go out to Australia and I jumped at it, it’s good experience,’’ he said.

“I’m lucky enough to be supported well by Dermot Weld this year and he has lots of nice horses.

“If I stay in Ireland there’s only racing once a week and it’s on the all weather. It’s warmer weather out here and there’s a bit more racing if I can get going.’’

Orr hails from Donegal county in Ireland and is one of seven children, his older brother Conor is a successful jumps jockey (that’s not something Oisin is too keen on at present) and the pair cut their teeth as youngsters on the pony racing circuit.

Sydney’s champion apprentice Robbie Dolan has set the standard for the young Irish riders over the past 12 months and countryman Tom Sherry is gaining momentum as he attempts to follow in the same footsteps.

Orr said he’s impressed with what Dolan has achieved, they knew each other back in Ireland, but his goals for the three month stay are different.

“It’s about experience and learning a bit more, learning about times and being here will help with my weight,’’ he said.

“In Ireland, doing bits of work at home, you’d never be timed but everything goes on times here.’’

There’ll naturally be a period of adjustment to Sydney racing for Orr but he says he’s had a good grounding since he arrived through trackwork and some barrier trials.

He spent some time riding alongside Hugh Bowman on Tuesday morning at Rosehill and though he didn’t say whether talk turned to Winx at all.

“I rode in a few trials on Tuesday and I’ve been riding a bit of work so I think after a few races I’ll be okay,’’ he said.

“I’d like to think I can get a horse to settle well, at home I definitely could, and I’m not mad on the whip.

“Obviously with the time difference I don’t get to watch racing here day to day. They seem to go hard in the first furlong then steady it up and sprint home. I suppose I’ll get used to it.

“It’ll take a winner or two for people to have a bit of confidence in me. Hopefully it won’t take too long to get up and going.’’

Orr is scheduled to return home on February 5 but says if all goes well it’s likely he’ll return in 12 months.