If The Jungle Rumbles, Bell Will Dream Of Everest

You can expect trainer Mick Bell to continue talking about how much he’d love to be part of The TAB Everest later this year if Jungle Edge can post his 17th career win at Randwick on Saturday. 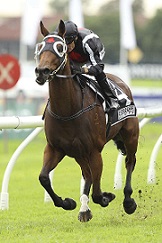 The popular Jungle Edge will be in his element at Randwick on Saturday. (Pic: Bradley Photos).

The front-running warhorse is back in Sydney aiming to go one better than 2018 in the Moet & Chandon Imperial Winter Dash (1200m) and Bell is on a high after the eight-year-old’s all the way win last week at Sandown.

Jungle Edge has run in the past two editions of the Sydney Stakes on Everest Day, he was runner-up to Pierata last year, but Bell wants a part of the big dance with his wet track specialist.

“We were fortunate enough to be one of the emergencies for the Everest and that in itself was quite exciting,’’ Bell said.

“He's probably a level or two below those horses, but on a heavy track he's capable at any level.

“I really like the concept of the race and it has captured the imagination of the racing public.

“If he happens to win I might pull up stumps and go home and start spruiking my case for the Everest.’’

The popular gelding will be having his 18th start in Sydney and while he’s only won twice he’s recorded two of his three Group 1 placings on heavy tracks in the Harbour City.

And it’s the heavy track that presents at Randwick that has Bell buoyant about making another trip north – this time bringing 3kg claiming apprentice Lucinda Doodt with him.

Doodt rode Jungle Edge into second place on a Soft 5 at Caulfield in May and her claim means he’ll carry 59.5kg which is 1kg less than last year when runner-up to I Thought So.

“Lucinda seems to be a good front running rider and I'm happy with that,’’ Bell said.

“Michael Poy (who rode at Sandown) would have loved to come up but he's trying to win the apprentice premiership and he can't really afford to leave.

“We've been up there that many times we're almost honorary Sydneysiders.’’

Bell said Jungle Edge, who opened $4.20 equal favourite with TAB, came through his Sandown win in excellent shape but the horse will be conceding as much as 10.5kg to his rivals – against that is his wet track ability.

All 16 career wins have come on soft or heavy tracks.

"It bought back memories, it was like she was there."

Jungle Edge's Sandown win on Saturday sparked many emotions for trainer Mick Bell, and hopefully the fan favourite mud lark can win again at Randwick on the weekend. pic.twitter.com/u64IDIHdfa

So weight doesn’t worry the affable trainer at all and he’s predicting a typically honest performance.

“I expect him to be in the finish, you don't expect them to just win though. It just doesn't happen like that but they will know he's there,’’ he said.

“In the right conditions on the right day it's hard to get past him and it's shaping up like it could be one of those days.’’

If Jungle Edge doesn’t win the Winter Dash but still runs well Bell said there’s every chance he could stay in Sydney for next week’s Civic Stakes (1350m) at Rosehill.