After missing almost a quarter of the season with a disc injury, jockey Adam Hyeronimus returns to riding at Randwick on Saturday much wiser about his own physiology.

Hyeronimus hasn’t ridden since Everest Day (October 19) and believes he rode for a good three weeks with a bulging disc before the injury, aggravated by a tumble on Everest day, presented itself. 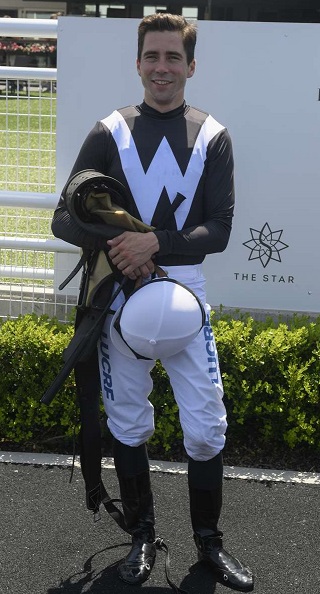 Adam Hyeronimus is back in action at Randwick on Saturday after an injury enforced three month break. (Pic: Bradley Photos).

“The most concerning part is I don’t know how I did it,’’ he said.

“I have to make sure I have good core strength, be conscious of my posture and what I’m lifting. They say a lot of people get them, that the majority of males will get a bulging disc, though how bad and severe is a different thing, at some point of their life.

“I was optimistic I was only going to be off four or six weeks but it’s not like breaking your arm. You have to manage it and hope for the best.’’

The 29-year-old was diagnosed with an L4-L5 bulging disc, plus a less severe L5-S1 issue, that was pressing on a nerve, causing hip pain and sciatica in the left leg and making movement very difficult.

He recalls the first sign of a back issue came at the official two-year-old trials in late September but says a fall after the post from Screen Shot in the TAB Highway on Everest day probably flared it.

Hyeronimus had three more rides on that day, which he completed, then spent three weeks on his back in a great deal of pain.

“The week after Everest I could hardly get around it was that painful,’’ he said.

“There’s not a lot you can do when you’re just laying on the lounge every day. I didn’t really listen to the specialist as well as I probably should have.

“In those first few weeks I couldn’t get out of the house or do things and that was the hardest bit.

“Once I got through that I was still in pain but I could manage it by taking pain killers and I was able to start physio, exercising and getting in the pool.’’

He’ll have around four rides for his comeback meeting at Randwick including the promising Mr Dependable, chasing a hat trick in an 1800m Benchmark 78, Taikomochi in the Listed January Cup (2000m) and Statuesquely in a 1500m Benchmark 78.

Hyeronimus has been riding trackwork for the past week and will test himself out at Thursday’s Randwick trials but is eager to get back to work.

“I think it’s a good meeting to get going again with a lot of the jockeys riding at Magic Millions,’’ he said.

“I don’t want to put too much pressure on myself, I have a few rides for Gai and Adrian, and I’m happy to be back.

“I’m doing all my normal activities now, I’m riding trackwork, and it’s time to kick on with it. It’s a long process, just because I’m out of pain doesn’t mean it’s not bulging, before it has fully healed.

“Hopefully now that I’ve learned a few different things I’ll be able to manage it better. I’m a lot more conscious of my back. I’m hoping once it is fully recovered I won’t have this issue again.’’

All the entries, form and replays for Saturday's Randwick meeting