New Everest slot holder Bon Ho says his star galloper Classique Legend is the most likely horse to run for him in October’s $15 million feature at Royal Randwick. 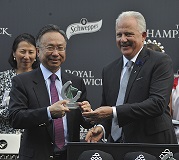 Mr Ho has been eager to be a more permanent fixture in the TAB Everest since Classique Legend ran sixth in the 2019 running and purchased the Australian Turf Club’s slot for three years.

The exciting grey was prepared by Les Bridge for the 2019 Everest, with Mr Ho buying the GPI Racing slot to secure a start, but if he is given a second shot, as Mr Ho believes he deserves, it will be as an international returning from Hong Kong.

Classique Legend's last Australian start was in the inaugural $7.5m The Golden Eagle where he ran tenth behind Kolding. The four-year-old is currently in quarantine and due to leave Australia in the middle of March.

“The most likely horse to race for me will be Classique Legend,’’ Mr Ho said on Sky Sports Radio on Monday.

“Classique Legend is moving to Hong Kong but I sorted out with trainer Casper Fownes if need be we can send him over to Sydney in September for the race.”

But there’s also a real wild card in the shape of an unheralded three-year-old called Sovereign Legend, who won on debut in Melbourne last Friday night, that Mr Ho said he could consider if the gelding measures up.

“He is quite promising, I would say only a remote possibility but this Written Tycoon three-year-old did very well in his first start,’’ Mr Ho said.

“And the trainer thinks if he lives up to what he expects of him in his next two or three races he might be the sort of horse we can consider.’’

Sovereign Legend is trained by John Sadler and would need to make the herculean leaps that Classique Legend did around this time last year to unseat his more proven counterpart as the number one choice.

Mr Ho also hasn’t ruled out sourcing another sprinter from Hong Kong to take his slot should Classique Legend not adapt to life in his new home or lose form.

The horse’s main Hong Kong aim isn’t until December’s International Sprint but he is likely to have a couple of starts in the lead up to a decision on whether he returns for the Everest.

Sovereign Legend salutes on debut, storming down the outside from last for an impressive win! @TheValley pic.twitter.com/dY8t71W3yV

“There are Hong Kong sprinters that I can talk to the owners regarding this but I think Classique Legend is as good a sprinter as any of Hong Kong’s top sprinters,’’ he said.

“We will see how he takes to Hong Kong and go from there. Having a very good temperament he should fit into Hong Kong very well.’’

The Hong Kong businessman joins Godolphin as second-time slot owners in 2020 with the Everest scheduled for October 17.

Godolphin again purchased the slot formerly owned by Damion Flower with the aim of improving on their third placing in the past two Everests with Trekking last year and Osborne Bulls in 2018.

Their classy mare Alizee ran in the Godolphin slot and ran seventh behind Yes Yes Yes.