No race is a gimme, every race is a challenge and that’s how trainer Greg Hickman views what lies ahead for his stable star Pierata as he kicks off what will be his final racing campaign at Rosehill on Saturday. 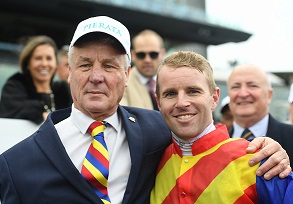 “This was our plan, history says he will struggle but all I know is he’s a very good horse and he’s well. You’ve got to start somewhere,’’ Hickman said.

“He’s carried 59 before, it’s not so much his weight but it’s what the others have to carry.

“People still question him. He seems to be a horse that doesn’t get the accolades. He’s always been a very good horse and so competitive.’’

It’s safe to say if Pierata can eclipse the Kiwi galloper Mr Tiz’s record set in 1991 when he lumped 58.5kg to win the Galaxy then his reputation will skyrocket.

A year ago Pierata carried 56.5kg to an unlucky second behind Nature Strip and since then has won a Group 1 All Aged Stakes, the Group 2 Shorts, run fifth in The Everest and won the Redzel Stakes.

He was the $4.80 Galaxy favourite with TAB on Thursday and Hickman said the horse’s preparation for his return has been faultless.

“But we didn’t want a gutbuster early in his preparation. I wanted to see more from him in the second and that’s why we put the blinkers on, he’s a different horse with blinkers.

“Every week in his work he has kept on improving.

“I got Keagan Latham to ride him last week and he said ‘wow what a horse’. He said ‘Eleven Eleven is a Ferrari, this horse is a jet’.’’

Tommy Berry rides Pierata for the 11th straight time in the Galaxy and Hickman indicated the jockey already has a plan in mind for navigating the race.

What Hickman knows is that his horse will run a 33 second final 600m, or thereabouts, and says traffic is his main concern.

“The barrier won’t be as big an issue as I thought when it first came out, Tommy explained to me what he can do and if it works out he will get a nice easy transit,’’ he said.

“One thing we do know is there should be plenty of pace in the race. All we can ask for is a trouble free run, the horse is well enough in my eyes to win.

“I’ve got him as well as I can to go to the races to be as competitive as we can be first-up.

“He’s done plenty of work this week, he’s still looking for more feed, I can’t rap him up much more.’’

Pierata wins a trial at Warwick Farm on March 5

The Galaxy also sees the return of Pierata's old sparring partner Kementari, one of four Godolphin runners in the Group 1 sprint, who has his first run since being gelded following a stint at stud.

Kementari had the better in the Hobartville Stakes and Randwick Guineas when they were three-year-olds while Pierata downed him in the Missile Stakes in the spring of 2018 and finished ahead (fifth verses seventh) in their last clash in the 2019 Canterbury Stakes.

Trainer James Cummings hopes Kementari can reproduce the form that took him to a placing behind Winx in the George Ryder at this meeting two years ago based on positive efforts in his two barrier trials.

“Since then destiny has dictated that he has to prove himself again,” Cummings said.

“He’s been encouraging us along the way since he came back to the stable and his trials leading up to this certainly did nothing to dampen our enthusiasm.

“One would imagine he should be ring rusty.”

Cummings also has Deprive, who meets Pierata 3.5kg better for a 1.2 length defeat in the Redzel Stakes, and mares Soothing and Savatiano taking on the Galaxy.