Happy Days As Winx Does It Again

Winx was asked the question by Happy Clapper but she had the right answer yet again as the superstar’s farewell campaign reached the halfway mark with a brilliant win in the TAB Chipping Norton Stakes at Randwick on Saturday.

Happy Clapper’s jockey Blake Shinn took him to the lead in the 1600m event and pushed him along from midway through the race to establish a good break 600m out.

But Hugh Bowman aboard Winx already had the wonder mare warming up by then and cut happy Clapper down in the straight to go on and win easily by one-and-three-quarter lengths in a race record time of 1min 33.27sec.

So it’s two races down after wins in The Star Apollo Stakes and the Chipping Norton, leaving only The Agency George Ryder Stakes over 1500m in three weeks and the Longines Queen Elizabeth Stakes over 2000m another three weeks after that to go before Winx’s amazing career is over. 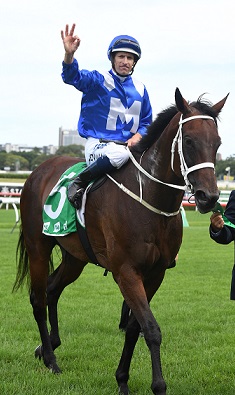 The crowd of 14,831 loved it, of course, and as she stormed to the lead halfway down the straight they went into raptures before cheering wildly again when she came back to scale.

Winx winning – even after racking up what was her 31st victory in a row - never gets old, but for her connections it’s still a relief to see her get through yet another big race safe and sound as well as with the ‘W’ next to her name.

Trainer Chris Waller was glad Happy Clapper made a genuine race of it rather than it being a sit-and-sprint WFA event in which Winx strolled home without any pressure having been applied to her.

“It was a good test for her and will bring her on nice for her next couple of runs,” Waller said. “We didn’t want to have a walk in the park with her by any means.

“They need stimulating and we can’t do it at home, they need to do it under race conditions to get that final bit of fitness into them, so it’s looking good for three weeks’ time and then three weeks after that it’s the grand final.”

Bowman said that as much as Shinn had rated a classy horse in Happy Clapper very well out in front, he had no doubt Winx would run him down.

“Blake really made it a test today, as Josh Parr did a few years ago on Red Excitement,” he said.

“But she can cover all bases this mare. She’s just an amazing athlete, there are really no more words to describe her.

“When you watch the replay, at the 700m you would have thought, ‘Well, she’s out of business’, and another jockey riding her may have thought that, but I knew when I balanced up there was no way that Happy Clapper could sustain that speed.

“I knew that when she balanced up she’d have the energy required to reel him in. To be honest, although I was pushing her, she did it with relative ease.”

Happy Clapper’s trainer Pat Webster said he knew before the home turn his horse was unlikely to hold Winx off.

“The only time, at the 600, his (Bowman’s) elbows were going and he was just kidding after that,” Webster said.

“He’s just saying, ‘I’ll just go straight past’. He had us well covered.”