Gytrash Snares Everest Consolation And, Yes, He'll Be Back

You wouldn’t blame trainer Gordon Richards for not wanting 2020 to end after his star sprinter Gytrash capped off his Everest campaign with a stunning victory in the $1m Yes Yes Yes Stakes (1300m) at Rosehill on Saturday. 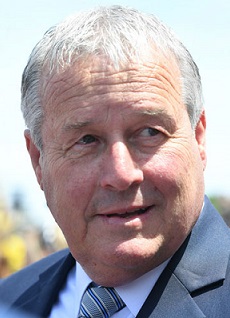 Not only did he bag the $580,000 first prizemoney but because he contested the TAB Everest, where he ran third, he also won a $750,000 bonus to take his total earnings for this three start campaign alone to $2.714 million.

No wonder Richards wants to come back next year and do it all again - if just a little differently.

“He’ll spell and run in the Lightning and Newmarket and probably the TJ Smith because he seems to like it here,’’ Richards said.

“Perhaps he’ll be first-up in the Shorts – there’s not enough money in the Concorde at $160,000 but the Shorts then a month later into the Everest. Hopefully.”

There seems little doubt that Gytrash will be an automatic selection for the 2021 Everest as he’d now be arguably Australia’s best sprinter given Everest winner Classique Legend is Hong Kong bound.

And in a little preview, perhaps, he carried the Inglis silks in the Yes Yes Yes as he did for the slot holder in the TAB Everest.

“He’s a people’s favourite and you can see why. He had some work to do, the leaders stacked them up and left him a little flat footed on heavy ground.

“He just knows how to win, he wants to win. Once he gets a full head of steam he’s hard to hold out.”

It wasn’t easy work, though, for Gytrash despite jockey Jason Collett settling him midfield.

When Haut Brion Her took an inside run on the home turn to dash to the lead about 200m it appeared Collett may have left his run too late but the gelding put on his trademark afterburners and rounded here up, much to Richards’ relief.

Gytrash, with a slick last 200m of 11.85 (Punter's Intelligence), won by neck over Haut Brion Her with Imaging another 2-1/4 lengths away in third.

“The jockey’s got ice in his veins, I couldn’t be as cool as him,’’ Richards said.

“Our plan was to be a bit more forward, and I don’t think they went helter skelter up front. Bit he dragged him back and put him in a nice spot.

“I was happy with where he was but he was there a bit long. Once he got himself mobile he was brilliant.”

Collett said he was confident he could pick up Haut Brion Her because Gytrash was able to chase her on his own terms.

In the TAB Everest the five-year-old found himself right out the back and was forced out of his comfort zone.

“I just wanted to keep him balanced and then he went through his gears really well,’’ Collett said.

“He got a chance to work through his gears, last start he was flat out the whole way chasing. Today is like he was in the Concorde when he ran past Nature Strip.

“(Haut Brion Her) is probably not the strongest 1300m horse so I had that im my mind when I saw her duck through.

“I just wanted to keep him balanced and he did that and was too good.”

Of the beaten brigade, trainer Joe Pride said he was proud of Eduardo’s effort in fourth and believes the tough run in the Everest just took a bit out of him.