The lucky slot-holders who will have the Brett Cavanough-trained Fender run for them in the $1.3 million The Kosciuszko are even more excited about their chances of climbing the peak in the wake of his latest run.

Cavanough is pretty happy too after seeing what a run in Group Two class has done for his horse.

Fender, a winner at each of his first four starts, jumped up steeply to the Theo Marks Stakes over 1300m at Rosehill last Saturday. He worked hard to lead from the outside draw in a field of 11 and wasn't headed until the 200-metre mark before fighting on for seventh, beaten 2.7 lengths.

"He probably had one quick furlong, then he got an easy one and then the tempo of Group Two races took over," Cavanough said.

"I thought he was strong enough late, way up in grade. Good clean-out before The Kosciuszko, so back home and freshen him up now.

"Hugh Bowman's locked in to ride, so there's no more to do. Give him an easy 10 days and then a soft trial and have him nice and fresh for The Kosciuszko.

"Saturday's run will just toughen him up. He'll be very tough after that run and that's exactly what I wanted."

Steve Haney, the organiser of the Super Six syndicate from the historic gold-mining town of Gulgong in the central west that was lucky enough to win a place in The Kosciuszko and then do a deal with Fender's connections, watched the race on TV back home. 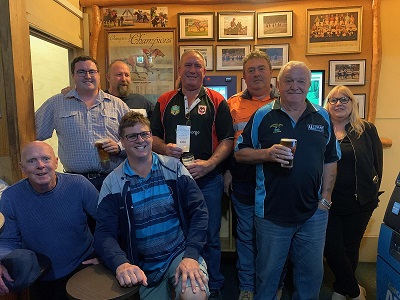 Steve Haney (front with glasses) and members of the Gulgong Super Six Syndicate.

"I can tell you we're very happy with our decision," Haney said.

"It was a great run on Saturday, over the extra 100m from his previous race and up in class. We can't wait for Kosciuszko day now. Hopefully, we can all come down for the race."

The Super Six syndicate who get together at the Centennial Hotel at Gulgong is named not after its number of members - Haney said 26 punters put in $20 each to buy 104 tickets in the slot draw - but after a tipping contest they began during the Covid-19-affected autumn and winter months.

"A bunch of mates put in $50 and we tip against each other in selected races over a six-week period," he said.

"A few of us had a little get-together at the end of one of those periods to hand out the prizemoney and someone said, 'Let's all put some money in for Kosciuszko tickets'. So we did - and we won a slot. It's a miracle!"

Haney put the tickets away for sake-keeping at his house and was busy in his job as a teacher at Gulgong Primary School when the slot draw was conducted.

When it emerged that a winning ticket had been bought at the Centennial Hotel, he started getting phone calls and text messages from excited syndicate members who thought they might have hit the jackpot. They were right!

"But I was in class. Anyway, the phone kept ringing and I'm thinking, 'I've got to do something'.

"I rang a mate from the syndicate and got him to go to my house. I told him where the key was hidden and where the tickets were in the study and he brought them all back.

"It was lunch-time by then and I met him in the school car-park. We went through the tickets together with the code and found that the syndicate had won!

"We're jumping around and hugging each other and the kids were looking on and wondering why we were so excited.

"A few of us met up at the pub later and went through the form and picked out Fender and now we're running with him to the big race. We couldn't be happier about that."