Guineas Delay No Sweat For Neasham And Mo'unga 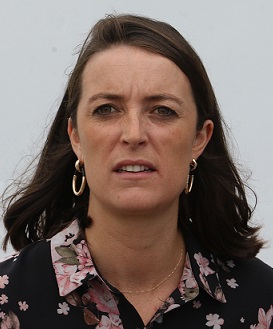 The colt was the eye-catcher out of the Randwick Guineas earlier this month, as he swept into second behind Lion’s Roar after being held up, and Neasham hasn’t missed a beat with him since.

Not even due to the washout last weekend and while the field has changed slightly the rookie trainer’s confidence hasn’t as she eyes her first Group 1 win.

“I’m sure it’s going to be a stronger edition with the addition of the Melbourne horses,’’ Neasham said.

“There’s something about this horse, he just has a bit of class about him, and if he handles the wet he’s the one to beat.

“This has been his main grand final to work backward from. He’s only third-up so he will have more left heading into The Championships but we wanted him peaking for this run.

“I think he looks like he has come on in every way since the Randwick Guineas. I suspect he will look better over 2000m than over a mile.”

Exactly how good Mo’unga looks over 2000m will determine the next step, whether Neasham and the owners want to press on to the Australian Derby (2400m) or take on the older horses in the Star Doncaster Mile (1600m).

Neasham said she’s kept an ace up her sleeve since Mo’unga’s Randwick Guineas performance, where he produced easily the fastest last 200m, by two lengths, of the Group 1 clocking 11.38 (Punter’s Intelligence).

“I think the blinkers have really helped him, he hasn’t worn them since (Randwick) and we’ll save them for game day. I think it means we can ride him that bit closer if we need to and blinkers tend to help them get through the ground as well.”

One thing Mo’unga, and Neasham’s Longines Golden Slipper runner Queen Of Wizardry, has on his side is the advantage of a grass track gallop this week.

Neasham took the pair to Queanbeyan on Monday for a solid workout on the course proper and she said it means she’s been able to train both horses as she would normally despite the rain delay.

“I was sitting in the hut on Monday morning and they’d gone for a canter,’’ she said.

“I could see them out walking the track and I rang (Warwick Farm track manager) Mark Jones and he said no chance (of a gallop). I looked to see where they were racing and saw it was a heavy 8 at Queanbeyan and they very kindly let us come down.

“Even more strange was that Tommy Berry was in Queanbeyan for lunch that day so it all just worked out.

“Everybody trains differently but I’m not a massive fan of synthetic tracks, I like them early in their preps but once they are up and racing and having good gallops I don’t use them. When you start changing things that’s when you get injuries.

“They had a treadmill gallop on Saturday once I knew racing was off. They were in need of a decent hitout on grass and it’s good for them to have had a feel of a wet track as well.”

Mo’unga was the $3.50 TAB favourite for the Rosehill Guineas on Wednesday while Queen Of Wizardry remains the outsider in the Longines Golden Slipper at $81.

Neasham said the extra week means Queen Of Wizardry has not only had a smoother lead up to the Slipper than she had a week ago she’s also a lot fitter.

“Queen Of Wizardry has only had one trial and I think she is fit and forward for a first-up assignment but the trip away is as good as a second trial,’’ she said.

“It’s not her grand final by any means having said that she’s probably more ready to go first-up this week than last week. (Mo'unga) was really good though the line on Monday, she powered clear of Mo’unga but he is a bit cheeky and knows where the line is.

“I hope she’s hitting the line well, if it’s a testing track I have a hunch she will handle it and that might play in her favour more than others.”

The Group 1 Champagne Stakes (1600m) on April 24 is Neasham’s ‘grand final’ for the filly, part owned by Sky Racing’s Lizzie Jelfs, who hasn’t raced since running fourth in the Magic Millions in January.

“The 1200m is the shortest you’d want to go with her but it’s very hard to get horses into the Slipper and it’s amazing we’ve got her in so we’re happy to line up,’’ she said.

“I like this filly, she’s a great mover and has a good set of lungs on her and good upside.”