Gift Horse Malkovich Out To Shower Owners With Riches

Not too many $1 million races are won in the shower but connections of unraced youngster Malkovich can thank a thought bubble Darby Racing’s Scott Darby had while washing if the colt wins Saturday’s Golden Gift at Rosehill. 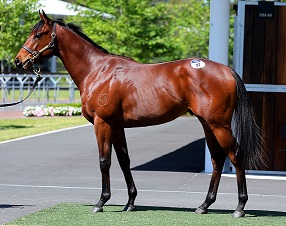 Malkovich will make his debut in the $1m Golden Gift at Rosehill. (Pic: Darby Racing).

Darby revealed the colt appealed to him in the catalogue for the Inglis Ready To Race sale on October 22, just over two weeks ago, and once he realised the Golden Gift was approaching he hatched a plan to secure the horse and did so for $240,000.

Everything about Malkovich’s journey to the new $1 million two-year-old feature has been unusual right down to selling the idea to trainer Bjorn Baker.

“He was a nice type of horse, I was in the shower daydreaming about the horse and I thought there’s that big race coming up,’’ Darby said.

“We’d done out breeze up videos and he was on our list, on the morning of the sale I did more research and they weren’t publicising he’d won a trial.

“It hit him by surprise but he got on board with it, he trialled enormous and he came through well so we thought we’d have a crack.’’

The colt was already called Malkovich when he was knocked down to Darby and as a fan of the actor he’s named after the moniker stood.

A trial one week after the sale told everyone Malkovich was in fact ready to race and Darby and Baker have the fingers crossed he can emulate Yankee Rose who won the Golden Gift in 2015.

Malkovich showed speed to lead that trial at Rosehill and quickly put six lengths on his rivals over 905m and it’s likely that trial is the reason he’s kept safe as third elect at $6 with TAB.

Baker said everything he’s seen of the colt has impressed him and despite the unconventional build up can only see him running well, especially if he has the talent his half-sister Songlike displayed to the trainer in her short career.

Songlike only had four starts but ran a close second to Alizee at start three then beat subsequent dual Group 2 winner and Group 1 placed Showtime.

“We’re going in a little bit blind but from what he’s seen he’s really been an impressive horse,’’ Baker said.

“I didn’t really know what to expect in the trial, it was a matter of trialling him and trying to get the right trial for this Saturday.

“He has a very relaxed attitude, he’s handled everything pretty well. Off his trial and what he’s shown us, we’ve been really happy with him.’’

Malkovich wins a trial at Rosehill on October 29

Trainer Bjorn Baker’s comments on his other Rosehill runners:

Sophiella (Race 1, $8.50): “She gets in with no weight and a good gate, we’ll be positive and try and lead. There’s no easy races on Saturdays but she’s an each-way chance.’’

Foreign Territory (Race 4, $9): “I think up to 1800m suits and the weight relief will be good for him. We’ll roll forward and look to be more positive than we’ve been with him and we can’t fault how he looks.’’

Baanone (Race 4, $13): “He’s a bit older and more mature now, I think that’s helped him. I think the form around him has stacked up, it’s a matter of getting him in his comfort zone and we are half way there.’’

Echo Jet (Race 8, $9): “He looks good and on his best form he is a chance. His trials have been pleasing so we know he’s good enough.’’