The hopes of plenty of punters will ride on the back of Cinquedea in the final race at Rosehill on Saturday and co-trainer Michael Freedman is confident the horse can carry the burden. 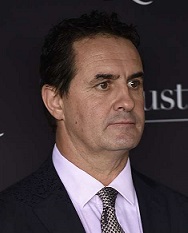 But there are no good things in the post-Winx era and Freedman hopes the decision to scratch from a midweek race the end of the season for the Doltone House Marconi Handicap (1500m) is the right one.

Cinquedea was the pre-post elect for that Warwick Farm race on July 31 and is $1.95 with TAB to send punters home a winner this weekend.

“You’d like to think from that good draw, he has Kerrin (McEvoy) riding, it’s a good opportunity for him,’’ Freedman said.

“On paper hopefully it all works out because he goes into Saturday in good order.’’

The four-year-old served notice he’s a city winner in waiting with a game second behind Phaistos at Rosehill a month ago on a heavy track.

On that occasion jockey Blake Shinn did everything he could to get Cinquedea over the line, he sprinted the 400m-200m in 11.94 (Punter's Intelligence) while Phaistos was held up, but Freedman concedes they simply “bumped into quite a smart one’’.

“He gives us the impression he is up to city class and with luck in running he can put it together on Saturday,’’ he said.

“I think he has made good improvement over the past four weeks. Not long ago we had a horse that was knocking around at the provincial tracks but he keeps improving.’’

Freedman said plenty of work has gone into correcting Cinquedea’s tendency to hang in races in the early part of his career, largely done by co-trainer Richard.

“He always showed Richard the ability but he was always a bit quirky and needed race manners sorted out,’’ he said.

“He’s still mentally maturing but he’s certainly racing a lot more tractably now than he was six months ago.’’

Nahuel started favourite when he was beaten 3.6 lengths by Curragh over 1500m but he won’t the punter’s elect this time, $7.50 with TAB, in a race Freedman said suits him so much more.

Cinquedea runs second to Phaistos at Rosehill on July 13

“His last run is better than it looked on paper,’’ he said.

“He didn’t get a lot of clear galloping room in the straight and it was certainly a pass mark. Going to 2000m will suit him a lot better and going onto a better track will also suit.

“It is a race that sets up quite nicely for him.’’

There’ll be no excuses fitness wise from the stable for Nahuel with the two runs under his belt.

Freedman said the colt will be back in the stable next week after a short let up but whether he races on or is summonsed to Hong Kong by his owner hasn’t been decided yet.