Farnan Ready To Prove The Slipper Fits In Todman Test

No two-year-old has stamped their authority on the fast approaching Golden Slipper as yet but trainer Adrian Bott is confident Farnan can prove he's the horse to beat come March 21 in Saturday’s Group 2 $300,000 UNSW Todman Stakes (1200m) at Randwick. 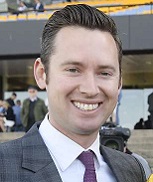 The Silver Slipper winner is the $2.90 favourite with TAB and you’d imagine another win would see him assume favouritism.

Bott said Farnan has long been the stable’s leading Slipper hopeful and hopes he can hand co-trainer Gai Waterhouse an eighth Todman and potentially a seventh Golden Slipper.

“He wasn’t up in time for a traditional race like the Breeders’, we had him on a Magic Millions path and that particular race didn’t work out for him.

“I don’t think the Silver Slipper was any fluke by any means and he’s ready to put his credentials on the line again.

“The Slipper is such an open race at this point of time, we haven’t got a dominant favourite yet so it’d be nice to see him do it again. And he if he is able to do so I think he is certainly a very strong contender for the race.’’

Two of Waterhouse’s Golden Slipper winners, Pierro (2012) and Vancouver (2015), have won the Todman on their way to the world’s richest two-year-old race.

Farnan sat off the leader Every Rose in the Silver Slipper and quickly asserted his dominance over the last 300m as he ran out a 3-1/4 length winner. It was a comprehensive win, he clocked the fastest last 600m (34.75) and fastest last 200m (11.99, Punter's Intelligence) of the race.

Bott said barrier one gives him the option to repeat that set up but don’t be surprised if he looks to take control from the front either.

“From that draw he has shown he has tactical speed, he’s versatile and everyone has seen that,’’ he said.

“But if he has the speed we’d like to see him leading.

“He came out of that race excellent, we’re very happy with him. He’s had a good week and he’s ready to step out again.’’

Bott concedes there are negatives for both horses – Dawn Passage a wet track, Yao Dash the 1100m – but says the duo are in for very good autumn campaigns.

“I’m happy with the way both of them have come back, both have improvement to come out of the race,’’ he said.

“Dawn Passage has a great turn of foot as we’ve seen but he’s not as effective on the softer conditions than he is on top of the ground.’’

Farnan wins the Silver Slipper at Rosehill on February 22

There could be some lofty goals for Yao Dash if he continues the rapid rise that took him to a gallant fourth in the Group 1 Golden Rose in the spring at just his third start with the All Aged Stakes mentioned as a possible end of carnival target.

He has a way to go just yet and Bott has the reservation that 1100m, considering he’s yet to race below 1200m, could be a touch on the sharp side.

“We will look to step him out in trip later in the preparation,’’ he said.

“He had an amazing start to his career and to do what he did at his third run in the Golden Rose, when he was physically immature, was great.

“Races like the Darby Munro and Arrowfield Sprint are there and maybe he develops into a horse for the All Aged, but he’d have to show he has come back a better horse to go to weight-for-age level.’’

TAB marked Yao Dash as a $7 chance on Thursday while Dawn Passage was $13.

All the fields, form and replays for Saturday's Randwick Guineas meeting