Everest slot holder James Harron has suddenly found himself in a position to have the pick of the litter when it comes to locking in his horse for the $14m race. 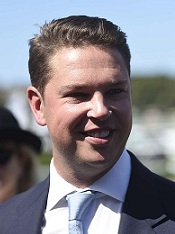 Eight of the 12 slots have been filled, with Enticing Star and Chris Waller Racing’s pairing this week, and Harron is now the only slot holder left without some perceived limitation on his choice.

Of course Godolphin will select a horse from their team and Coolmore’s preference is also to race one of their own while the Melbourne Racing Club slot goes to the winner of the Schillaci Stakes at Caulfield seven days before the TAB Everest.

It’s a position Harron is keen to exploit.

“We’re quite comfortable sitting back and watching at the minute and watching things unfold,’’ Harron said on Sky Sports Radio on Thursday.

“It’s a daily thing, it’s great to watch and keep up with but we’re playing a last man standing strategy and hopefully that works out well for us.

“We have seen the same few older sprinters not be too far apart from each other the last two years.

“You always have to think there’s going to be a new kid on the block, or a few new kids on the block.

“There always will be a changing of the guard, and it could be a year where an up and coming horse will take over the reins.’’

In the two years of the TAB Everest to date Harron has taken differing approaches.

He waited until September to lock in Redzel, a horse on the rise and in form, in the inaugural year and came up trumps while in 2018 he secured Vega Magic after that horse won the Bletchingly Stakes at the end of July but his chances were cruelled by rain.

That’s another factor in Harron’s mind, versatility, as in the two runnings so far we’ve seen a Good 3 and a Heavy 9.

“Looking overseas is not our first preference. Ideally we will find a domestic horse that is on the up and has got current form,’’ he said.

“I think there are so many different ways to approach it and so much water to go under the bridge.

“There’s obviously a lot of horses coming back to trial over the next couple of weeks and a host of lead up races.

“You can see how well a few horses have run in the consolation race, In Her Time and Pierata, that haven’t ended up getting a slot, it shows you there are plenty of horses around that periphery level that haven’t got into the main race that would have been a top three chance.’’

As Harron alluded, there can be advantage in sitting back and watching.

While two thirds of the field is locked in it can’t be forgotten that last year four slot holders were forced to make changes.

Max Whitby & Neil Werrett initially selected Menari but when that horse broke down switched to three-year-old Graff, who ran fifth.

The ATC went with Nature Strip but a failure in the Moir saw them team with Godolphin and Home Of The Brave, then had to go with eventual third placegetter Osborne Bulls.

Damion Flower selected English, then the mare lost form and he changed to Viddora while GPI Racing’s first choice was Invincible Star who was ruled out and replaced with Le Romain.

“Anyone that is a slot holder, or in any way part of this wonderful race, is keen for it to be dynamic and be disruptive and be exciting,’’ Harron said.

So the game is a long way from over.

Please be advised the Beaumont Newcastle track is still deemed not suitable for racing. As a result, the meeting scheduled ...
Read More