Derby A Case Of Hero Worship For Parr

When jockey Josh Parr finally wins an Australian Derby he says there’ll be a spot created on the top shelf of his trophy cabinet for the silverware.

That’s how much Parr reveres the three-year-old classic and he feels Shadow Hero is very well set up to give him his best chance yet to claim the Group 1 $1m Bentley Australian Derby (2400m) at Randwick on Saturday.

Shadow Hero, second elect with TAB at $3.90, has two Group 1 wins at Randwick to his name, and holds a 4-1 count over the favourite Castelvecchio, and Parr is confident he can avenge his fourth placing behind the Dundeel colt in the Rosehill Guineas.

“His sectionals were very good at Rosehill, he was in a position from an awkward draw that was going to make it difficult to win from,’’ Parr said.

“I could still win from where I was until I was forced around the outside of Scorpz who was retiring from the race.

“Trying to circle the field at Rosehill is difficult at the best of times let alone when you're spotting Castelvecchio four or five lengths up ahead of you.’’

That told Parr his run was every bit as good as the winner and he’s adamant trainer Mark Newnham has him in a better position to run out the 2400m than in the spring when a beaten favourite in the Victoria Derby.

And he feels the race has the potential to pan out a lot more in his favour.

“From first look it could develop into high pressure and be a strongly run Derby which would suit a horse like Shadow Hero,’’ he said.

“I see horses down low that will look to lead out of the straight then you have McDonald (Castelvecchio) and Berry (Warning) on the two other favourites drawn outside of me that will need to make a decision early.

“I'm as keen to win the Derby as a jockey as what Mark is as a trainer. I think that goes for most people because it's one of the most prestigious races in the country.’’

Parr has provided three of Mark Newnham’s four Group 1 wins to date and he hands over the reins to Rachel King, who rode Newnham’s first Group 1 winner Maid Of Heaven, to partner Quackerjack in the Group 1 $1.5m The Star Doncaster Mile (1600m).

It’s a remarkable piece of teamwork between the two jockeys when it comes to Quackerjack – King says the horse is Parr’s ride and she’s happy to play understudy for times like Saturday when the he’s weighted out of Parr’s range.

“Mark has been very fair to Josh and I right from the start,’’ King said.

“The main reason I got on the first time in the Goulburn Cup was because Josh was riding Shadow Hero in the Derby the day before and he didn't want to rush back. 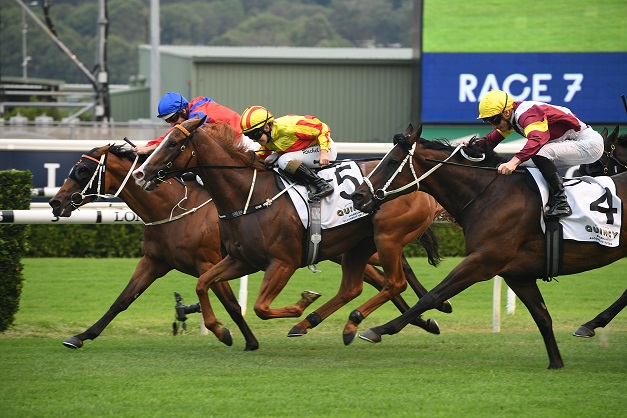 “He was always straight up with both of us. He's always been Josh's ride and he's done a fantastic job in getting him to relax.

“We knew he would get a light weight in the Doncaster so that was my opportunity to jump back on.”

As much as the flashy front-runner is ‘Josh’s ride’ it’s appropriate that King takes the Doncaster mount after she rode the gelding to victory in the Group 2 Villiers Stakes (1600m) in December to earn a Doncaster exemption.

She said the plan on Quackerjack, who won the Liverpool City Cup first-up then ran fourth in the Ajax Stakes under Parr three weeks ago, is a simple one.

“All being well we will be able to work our way to the front and control things, that seems to be how he likes it best,’’ King said.

“I'm not too worried about where he draw with him but the other times I've ridden him I've drawn out wide and had to work hard to get across.

“It'll be weird not having to do so much work but it'll be nice not having to use that extra fuel early. He's such a tough horse and it seems the tougher run he gets the better he goes.”

Quackerjack, $17 with TAB, is aiming to be the first Villiers winner in over a century to take out the Doncaster.

All the fields, form and replays for Day 1 of The Star Championships at Randwick