From one boom three-year-old to another – a week after partnering star filly Libertini to a first-up victory jockey Tommy Berry is looking to exciting colt Exceedance to make a spring statement of his own at Rosehill on Saturday. 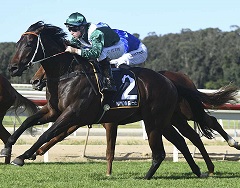 Berry has a lofty opinion of Exceedance and where he stands in what appears a strong three-year-old picture will become clearer in the Group 3 $160,000 Sky Racing Active San Domenico Stakes (1100m).

The expectation is a little different to last weekend, though, as Libertini started long odds-on.

“He did a lot in a short time, he was running good times, a bit like Libertini,’’ Berry said.

“She had to go out and confirm the boom on her and he has to do the same.

“We’ve seen some nice three-year-olds come back, like Bivouac, Libertini, even Pandemic, and step up and it’s his turn to step up and say he’s going well too.

“Yes Yes Yes is going to be in the race, I think there’s a lot of depth the whole way through the three-year-old ranks.’’

When we last saw Exceedance on the racetrack he posted a best of the day last 600m of 32.21 (Punter’s Intelligence) in running a close third behind Splintex over the Rosehill 1100m on June 1.

The Hawkes stable has given him just the one trial leading into the San Domenico and it was Berry’s only opportunity to sit on his back and assess how he’s returned.

“Physically he’s the same horse, he was already a lovely strong colt before he had that break. Mentally he’s probably a bit better,’’ he said.

“Ball Of Muscle was in that trial and he’s obviously a quick horse. He showed me he hasn’t taken a step back anyway.’’

There are a few questions to be answered about Exceedance, who opened $4.80 third elect with TAB on Wednesday, and the San Domenico will at least answer one or two of them.

Obviously there’s the class angle, how he measures up with proven colts like Bivouac and Yes Yes Yes, and there’s the mystery over his ability to handle a wet track.

Berry hopes to also get a clue on whether he’s suited to the 1400m of the Group 1 $1m Golden Rose.

“If you ask me now I’d say he’s a sprinter but it wouldn’t surprise me to see him get over ground,’’ he said.

“He has a devastating turn of foot and these get back run on types we can get caught out about once they do get out over ground.”

What about the prospect of a wet track?

Exceedance runs second in his Warwick Farm trial on August 23

“He’s a clean actioned sort of horse, I couldn’t see it being a big threat to him but you’re not going to know until you get him on it.’’

In his two starts to date Exceedance has conceded a decent head start and that’s something that leads Berry to believe he could be a short courser, dare we say it in the Chautauqua mould.

But if he can change his racing pattern with a bit of experience?

“I wouldn’t call it a racing pattern at the moment because he’s only had a couple of starts but he seems to get back a little too far in his races,’’ he said.

“He’s only got a seven horse field on the weekend, it’d be nice if he could be more prominent. He’s a very easy ride, I’m sure if I gave him a squeeze at the start he’d come back to me.

“But if he can run home in the same sort of times he has been he’s going to be in the finish.’’