The buzz around Libertini isn’t lost on trainer Anthony Cummings.

He puts it down to the Winx effect - we’ve just been through an unbelievable period in racing and people are looking for a new star to latch onto.

If, as expected, Libertini takes out the Group 2 $200,000 Darley Furious Stakes (1200m) and emulates Winx (who won the race in 2014) it will only fuel the view that the filly could be the sport’s next big thing. 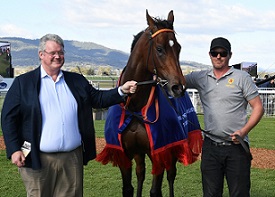 “There’s an unusual level of expectation in the community for the sake of what Winx has done,’’ Cummings said.

“Part of that expectation is could she be the next one. I’d love if that turns out to be right but the thing is, regardless of that, she’s just very good.

“If she turns out to be that good it’ll be sensational.’’

Libertini, brilliant first-up winner of the Silver Shadow Stakes, was closing in on Winx-like odds at $1.18 with TAB on Wednesday.

“I’m not silly enough to think she is going to be undefeated (from here), you take it if you can but it will be what it will be.

“If she continues to get it right then people will turn up and be as interested in her as they have been in the other good fillies as they’ve gone through their careers.’’

Since that Silver Shadow win there’s been talk that Libertini should be snapped up for a TAB Everest slot, she’s $9 in the all-in market, and that her Winx-like stature (big, strong filly who looks more like a colt or older mare) means the Princess Series is going to be a formality.

Cummings feels Libertini has earned the lofty reputation, albeit swiftly, but keeps the ‘great uncertainty of racing’ in mind.

“The three-year-old year is the most competitive in many respects and in terms of the racing the hardest to predict,’’ he said.

“It’s a matter of her being given the right opportunity to show herself the best she can. She will get beaten along the way, as they all do.

“I’m trying not to downplay what she did or put an unrealistic rap on her.’’

Punter’s Intelligence sectional data from the Silver Shadow shows Libertini’s last 600m was a slick 32.74 and jockey Tommy Berry had the brakes on late, but she till ran the race’s fastest last 200m (11.07).

Cummings said there’s been natural improvement in the filly, an ominous sign for her rivals especially the likes of Villami and Let It Pour who meet her on the same weight terms.

“I couldn’t put a measure on (her improvement),’’ he said.

“Her gallop on Tuesday was very good but it was nothing she couldn’t have done before. All I know is she went home in good shape and has done very well since.’’

Libertini galloped with stablemate Baller, who contests the Sydney Markets Handicap (1200m), at Randwick earlier this week and easily accounted for him.

“Baller led her up and she came up to him. I said to Tommy that she wasn’t there to prove anything, just to roll her arm over,’’ he said.

Libertini wins the Silver Shadow Stakes at Randwick on August 24

“He gave a really good kick at the top of the straight so his work was as good as you’d hope to see.’’

Baller disappointed Cummings with his eighth placing, despite being only beaten 1.7 lengths, in the Show County (1200m) two weeks ago and has retreated to restricted company to get the confidence back, both for him and the horse.

The four-year-old opened a $2.20 favourite with TAB so plenty is riding on him bouncing back.

“He wasn’t far away but he was still below where I thought he was. He’s needed a couple of gallops to get himself up and running,’’ he said.

“I think he was underdone first-up, he had a strong gallop on Saturday and another on Tuesday so he was out to prove a point.

“He goes back in grade and he needs to win to get his rating up and get to the races I want him in.’’