Trainer Anthony Cummings has no trouble believing the $7.5 million Iron Jack Golden Eagle (1500m) will quickly establish itself alongside other Sydney racing staples.

The only feature race in Australia exclusively for four-year-olds has its first running at Rosehill Gardens on Saturday and Cummings is eyeing the lion’s share of the prizemoney with in-form mare Mizzy. 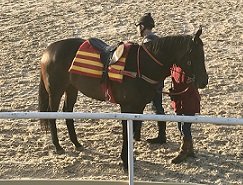 He says an attractive aspect of the addition of the Golden Eagle to the spring calendar is that 10 per cent of the prizemoney on offer will be donated to charity.

“It’s a wonderful initiative from Racing NSW to do that and it’s great to give something back to the community,’’ Cummings said.

Wherever Mizzy finishes in the Golden Eagle, Ronald McDonald House will be a winner as the connections’ preferred charity.

Cummings knows Mizzy’s task isn’t going to be an easy one with a high class group of four-year-olds assembling but he says it’s a sign the race is being embraced and will continue to grow.

“The depth of talent that is there really speaks to it and it’s been accepted both here and internationally so it’s a success before it starts,’’ he said.

“Not many initiatives can do that but in NSW we’ve seen quite a few.

“The Golden Slipper was the first one, the Golden Rose, then you see The Everest and now the Golden Eagle.

“There has been a lot of new races invented here that from inception have been good ideas that have been embraced by the racing community, then by the public in turn, and turned out to be wonderful successes and this race will be no different.’’

The strength of the race can be underlined by the fact Mizzy, a $21 chance with TAB prior to the barrier draw, won a Group 3 and two Group 2 races at her first three starts this preparation before a game third in the Silver Eagle (1300m) on October 12.

Just behind her was Saturday's Group 3 Nivison winner Madam Rouge.

Cummings said Mizzy, to be ridden by Jason Collett, will be much better suited going back to 1500m than she was in the Silver Eagle.

“Last time we ended up running third, which was the first time she was beaten this prep, but she came back in distance which I think was a major concern for her and the worry we had going into the race,’’ he said.

“She has good gate speed and that’s been her hall mark, that tactical speed from the gates without much apparent effort leaves her very strong at the finish.’’

Mizzy has raced twice over 1500m at Rosehill, both times on heavy tracks, for a fifth in the Group 2 Stan Fox Stakes and fourth in the Group 1 Coolmore Classic last season.

She was a maiden going into the Stan Fox and had only won a Canterbury maiden prior to the Coolmore Classic but she’s come of age as a four-year-old.

“She wasn’t in those good races early on by mistake,’’ he said.

“It was because we’d seen it in her and she just wasn’t translating what we were seeing in trackwork into race day performances.

“Mentally she had to take a step and this time she has done that and it’s now reflected in her race performance. She worked really nicely this morning and I’m sure she will run to her form.’’

All the entries, form and replays for Saturday's Golden Eagle at Rosehill