Popular sprinter Santa Ana Lane will have a third chance at climbing Australia’s highest peak as Coolmore’s representative in the $15m TAB Everest.

‘Santa’ was conquered by Coolmore’s gun three-year-old Yes Yes Yes, who now stands at Coolmore’s Hunter Valley stud, as he finished second in the 2019 edition, that followed a sixth placing behind Redzel in 2018.

The five-time Group 1 winner, trained in partnership by Anthony and Sam Freedman, has an impressive record at the Randwick 1200m and last season was not only runner-up in the Everest but he chased home Nature Strip in the TJ Smith Stakes during The Championships. 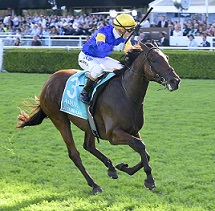 He won the TJ Smith a year earlier and ran a record in winning the Group 2 Premiere Stakes prior to his first Everest attempt.

“It’s a great privilege to have Santa Ana Lane in the Everest for the third year running,” co-trainer Anthony Freedman said.

“Given his record at Randwick over 1200m we were confident he would receive a slot so it has been our sole focus this preparation.

“It’s a race that continues to grow in popularity each year and we are proud to be involved.

“We’re very pleased to be teaming up with Coolmore as they have been long time clients of the stable.”

It will be the first time Coolmore hasn’t been represented by one of their own stock.

In the inaugural TAB Everest, three-year-old filly Tulip ran a game fifth while Aidan O’Brien has sent Ten Sovereigns and US Navy Flag from Ireland to Sydney without success in the past two years.

With O’Brien not having a suitable horse for 2020, and complications due to the pandemic, Coolmore’s Tom Magnier said Santa Ana Lane is a high class galloper and they were only too happy to partner with the Freedman stable.

“Coolmore has a long-standing relationship with the Freedman family and we are delighted to partner with Anthony and Sam with Santa Ana Lane in this year’s Everest,” Magnier said.

“Santa Ana Lane is out of a Fastnet Rock mare and he is one of the best sprinters we have seen in the past decade.

“Anthony and Sam are very happy with the horse and we believe if he brings his best, he will be hard to beat.”

The eight-year-old is a $21 chance in TAB’s Everest market ahead of his planned resumption in the Group 2 Gilgai Stakes (1200m) at Flemington on Saturday where he will clash with Mike Moroney's confirmed Everest runner Tofane.