Champion trainer John O’Shea describes “comeback” apprentice Billy Owen as an “underestimated talent” and has no trouble entrusting the 26-year-old with the job of continuing Dawn Raid’s winning run at Rosehill on Saturday. 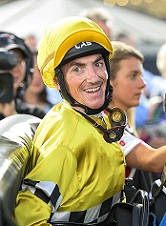 Owen is making the most of his second coming as a rider as well as the chance to partner Dawn Raid after thinking he’d missed the boat when the gelding started his picket fence last month.

He was suspended when the five-year-old won at Hawkesbury on December 9 and thought O’Shea would stick with a winning formula when he raced at Newcastle 13 days later.

“I thought I may have missed out when he won but John was good enough to give me the ride at Newcastle,’’ Owen said.

“There’s been a good bit of momentum over the last 10 or 12 weeks and getting results and riding well gives you confidence.

“The hardest thing is to keep that momentum going. It’s a tough game to keep your name there and keep getting the good opportunities.’’

But before that, some seven years ago, he was an apprentice and admitted he didn’t put in the hard yards to overcome injury and basically gave that up to work for Olive and wound up riding on the picnic circuit over the past couple of years.

Single Gaze leaving the Olive stable wasn’t the catalyst for a comeback – he’d been working on that in secret for some time – that started officially in May.

“I didn’t tell anyone I was having a go at coming back, I thought I’d do it myself and if it doesn’t happen I’m only letting myself down,’’ he said.

“It took me a good two months to fit back in. I’d ridden at the picnics a bit but being in bigger fields it took a while to get back into being profressional.

“I’m doing plenty of miles and getting some quality rides and it’s good to get results on top of that.’’

Owen has a respectable 36 wins from around 240 rides in the 2018-19 season and Dawn Raid handed him his first city winner with an easy victory at Canterbury on January 4.

Some of the gelding’s owners also had shares in Single Gaze so his partnership with the horse is made even more special.

Dawn Raid, a winner of seven from 20 starts, tackles the Richard Hutt Handicap (1500m) where he is a $7.50 chance with TAB to make it four wins on the trot.

With Owen’s 3kg claim he’ll carry 1.5kg less than his Canterbury win and the jockey said from barrier one it makes his job that little bit simpler.

“We’ll be up in the first few and work it out from there. He just knows how to win, it’s like he’s forgotten how to do anything else.’’

Dawn Raid makes it three straight at Canterbury on January 4

O’Shea said Dawn Raid has come into his own this preparation and sees the inside barrier as an advantage Owen can use.

“Bill’s two rides on him have been first class. He’s an underestimated talent,’’ O’Shea said.

“From one he will have plenty of options, either box seat or thereabouts again and that is our favoured option at Rosehill.

“He’s going up in grade but I thought he was dominant ther other day.’’

John O’Shea’s comments on his other Rosehill runners:

Fox Swift (Race 3, $13): She’s a talented little mare who had no luck the other night. Hasn’t drawn any good so we will be giving them a bit of a start but she has plenty to offer.’’

All Over Bosanova (race 5, $7.50): “She’s coming off a setback. She doesn’t map well but she needs to get started. Her future lies in some nice Listed/Group 3 races in February sand March when traditionally you get that odd bit of rain.’’