So You Win holds the mantle of the shortest priced favorite of the day at Rosehill on Saturday and a bullish Jason Collett says the promising four-year-old will excel on a wet track. 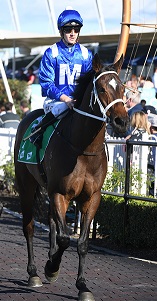 Jason Collett returns after winning on So You Win at Rosehill. (Pic: Steve Hart)

The gelding returns to the scene of his most impressive victory to date in the Kensei Handicap (2000m) with successive Rosehill 1800m wins against his name and it was his latest win that told Collett he wants more give in the track.

It's an ominous statement considering So You Win, $1.60 favourite, was so impressive in scoring under 58.5kg two weeks ago.

“The race panned out nicely for us the other day. It’s a smaller field and there probably won’t be as much pressure but I think the softer track is going to help,’’ Collett said.

“He felt the track a little bit the other day so getting onto a soft or heavy is going to be in his favour.

“He’s in form which is important and you’d expect a pretty similar run on Saturday.’’

Collett, of course, is riding high after finally securing his maiden Group 1 win last weekend on Invincibella for So You Win’s trainer Chris Waller.

Among his full book of rides at Rosehill is the luckless Drachenfels in the TAB Rewards Handicap (1200m) and it’s a mount he’s very much looking forward to.

The Bjorn Baker-trained gelding has featured heavily in the stewards report in both starts this month and Collett said he’s wiser for a second-up sixth over 1100m two weeks ago.

“He’s a tricky character. Now I know him better I will be able to ride him accordingly and give him the space he needs, not riding him for luck.’’

Drachenfels ($10) has come up with the inside barrier on Saturday and Collett said after what happened last start he’s keen to give him plenty of room.

The gelding clocked the fastest last 600m of his second-up race in 33.45 and the best last 200m of 11.22 (Punter's Illigence) despite being badly held up in the concluding stages.

“He’s been finishing off his races really well and we went to go between two runners, which would be comfortable for most horses, but he didn’t want a bar of it and made a real mess of it,’’ Collett said.

“He’s a backmarker who needs tempo and luck but he doesn’t help himself.’’

In-form mare Nicci’s Gold is a horse Collett knows well having won three races on her back and he says she’s not out of place in the Listed $150,000 Civic Stakes (1350m).

So You Win scores at Rosehill on June 15

“The wet track is a huge plus. She’s up in grade and isn’t weighted the best on her true weight but that track brings her back into it,’’ he said.

“I didn’t think there was a standout in the race and she’s the type of horse that can pop up.’’

And Collett wraps up the day with last start Canterbury winner Travancore for partner Clare Cunningham in the Rosehill Bowling Club Handicap (1500m).

It was his third run for the Cunningham stable and the first time he’d produced the turn of foot he’s capable of.

“He took a couple of runs and we were learning about him. That win has given us more confidence,’’ Collett said.

“He’s eligible for a Wednesday race carrying top weight but he can go into a 78 on a Saturday with a lighter weight. The track and distance are fine, it ticks a lot of boxes.’’