Clare Sets A New Mountain For Cradle To Climb

Trainer Clare Cunningham says she’s ready to find out a bit more about her smart sprinter Cradle Mountain when he kicks off his winter preparation slightly out of his comfort zone at Randwick on Saturday. 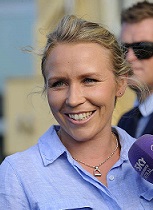 What we know about the five-year-old is he’s a winner, with six wins from 10 starts, and potentially stakes class. What he hasn’t done yet is win when he hasn’t led or below 1200m.

So a couple of questions should be answered in the EML Handicap (1100m) where he’s a clear $2.60 favourite with TAB.

Cunningham said the gelding had a good spell after finishing second behind Fell Swoop in the Listed Razor Sharp in mid-December and heads to Randwick 100 per cent.

“He’s the biggest and strongest he’s ever been,’’ she said.

“When we got him he was very wiry and he’s been slowly getting thicker and stronger. When you looked at him to start with you wouldn’t think he was a sprinter.

"He’s not one of those robust horses, one thing you know is if he’s at the races I’m happy with him.’’

It’s been almost a month since Cradle Mountain won a trial at Randwick and Cunningham explains the reason for the gap was a hoof infection that came on shortly after the trial.

She was aiming to resume in the Wagga Town Plate in early May but, while the issue had resolved within a day or two, the injury set the horse back.

A jump out at Warwick Farm recently has Cradle Mountain ready for Saturday but Cunningham stressed he’s not a horse that needs a lot of work.

Cradle Mountain has only raced over 1100m once, first-up at last year’s Scone carnival, but he badly pulled a hamstring in that race.

In all six of his wins he’s led all the way so what happens when the gates open will be interesting and completely up to jockey Jason Collett.

“The 1100m is a little shorter than what he’s started over at his last two preps but it does look a good race for him,’’ she said.

“I thought this race is quite competitive but we aren’t going to shy away because we have to face them at some stage.

“I’m leaving it up to Jason but the beauty of drawing where we are is we’re not dictated to by others.

“If we’d drawn inside we might have to use up a bit of petrol to get to a position where we aren’t locked away. If something is really speedy and crosses him it’s probably his worst nightmare.’’

If the gelding proves too sharp there’s a good chance he’ll head to the Listed June Stakes (1100m) in two weeks or if Cunningham thinks he needs a bit more time may wait for the Winter Dash (1200m) on June 22.

All that is moot until Saturday’s result is known and for now Cunningham is excited to have a flag bearer for the stable up and running.

“We’ve had a quiet patch in the past six months, Just Shine was meant to help us through the autumn but he broke down which left a bit of a gap in the stable,’’ she said.

“So it’s nice to have a horse like this to help you get out of bed in the morning, hopefully he can keep the ball rolling for us.’’