Trainer Clayton Chipperfield isn’t hell bent on a TAB Everest start for his boom galloper Catalyst but would be unlikely to turn one down if he impresses in his Sydney debut at Randwick on Saturday. 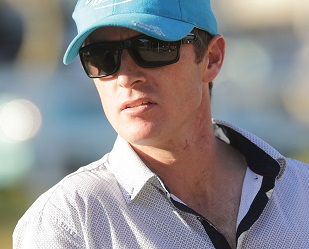 Chipperfield said Plan A is to use the 1300m Silver Eagle as the stepping stone but is wary there’s at least seven vacant TAB Everest spots (Godolphin will run their own horse) so the $15m pinnacle could be substituted as the Golden Eagle lead up.

And what better way to stake your claim for a TAB Everest berth than by engaging the race’s reigning champion jockey, Glen Boss.

“There’s 15 million reasons to think about running in it,’’ Chipperfield said.

“It’s probably a race you only get an opportunity to run in once.

“If we weren’t coming over to Sydney we’d have stayed in New Zealand and run in three $200,000 races. It’s a no brainer, if you have a horse good enough you’ve got to go.

“The prizemoney is unbelievable compared to New Zealand. To be in a position like this is great, even to be considered a chance to be running in the Everest.

“If he happens to win or is unlucky not to win there’s possibly a slot in the Everest and if we did get one we’d look at that.”

Catalyst is $15 in TAB’s Everest market, in the Shorts he’ll meet Classique Legend and Bivouac who are both on the $11 line in betting so the race is a real measuring stick for his prospects.

Chipperfield is training Catalyst remotely from New Zealand but has Chris McNab and Matthew Ward on the ground in Sydney preparing the Group 1 winning four-year-old.

Prior to leaving home he won an 1100m trial at Taupo, that was about a month ago, and has been put through his paces by Boss in a couple of serious gallops in the past week or so.

“He’s ready, his 1100m trial in New Zealand was impressive and he managed to do that under a hold beating a nice field,’’ he said.

“All the reports from Australia is that he’s ready and fresh and I think he will let them know he’s there on Saturday.”

Catalyst has barrier one in The Shorts, a gate he’ll likely make a bit of use of in the early stages.

He hasn’t raced below 1200m as yet in his nine starts and when he ventured to Melbourne in the autumn he’d won a 1200m race first-up before running a narrow second to Alligator Blood in the CS Hayes (1400m) and finishing unplaced in the Australian Guineas.

Chipperfield said he can make use of a favourable draw and has a clear picture of where he wants the horse in the run.

“You wouldn’t want to be any further back than fifth or sixth, if he can be a little handier and comfortable that’d be great,’’ he said.

“He has a good burst at the finish and if the pace is on up front he should finish off nice and strong.

Catalyst made his return to the track earlier today at Taupo and looked as classy as ever, leading home Aretha and Sherif from a field that also included The Chosen One, Quick Thinker and Prise De Fer. pic.twitter.com/kC6wATlbLz

“It’s not going to be an easy job, he has to find his rhythm in a quickly run race over 1100m, but if he’s putting his best foot forward and we see that sprint he has in New Zealand he should be running on.”

Regardless of whether Catalyst earns a TAB Everest start, there’s a definite sense of unfinished business for Chipperfield when they finally meet Alligator Blood once again whether it’s in the Silver Eagle or they face off in the $7.5m four-year-old grand final at Rosehill on October 31.

The pair staged an epic clash in the CS Hayes in February and he said there has been plenty learned from his experience earlier this year.

“I learned to not take any Australian horse too lightly, things can turn upside down pretty quickly,’’ he said.

“I know he’s won a Group 1 but I think that (CS Hayes) was the best race he’s ever run and we know we can be competitive at his best.

“Hopefully we can turn the tables on Alligator Blood.

“If we only meet him the once and it’s the Golden Eagle the media will love that. It’s going to be an exciting race.”

Alligator Blood is the $6 TAB Golden Eagle favourite with TAB while Catalyst is $11.