It’s not a new phenomenon for trainer Scott Brunton and his pocket rocket The Inevitable to be underestimated going into any race let alone the third richest in Australia.

He’s used to being the little guy and that’s a fair call because at just 14.8 hands the four-year-old is a little guy given the average thoroughbred stands somewhere between 15.2 and 17 hands. 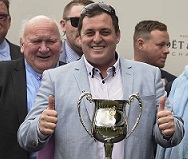 But as he showed winning the Silver Eagle at his Sydney debut, the Tasmanian is all heart and Brunton is rapt to have the chance to race for $7.5 million in the Iron Jack Golden Eagle (1500m) at Rosehill on Saturday.

“I think it's outstanding and to be associated with a horse like him,’’ Brunton said.

“It's in our culture to go for the underdog and if that's what people want to perceive him as we are happy to roll with it.

“We're extremely grateful to be in the race. We're nervous like you wouldn't believe, if it works out for us it will change our lives.’’

The back story of The Inevitable has been well documented since his Silver Eagle win three weeks ago – he cost Brunton $90,000 and the horse’s size was a sore point between him and his father for 12 months.

But the gelding has won eight of his 10 starts and leaps each tall building Brunton places in front of him like a boy wonder and it’s clear he means the world to all concerned.

“To have one good enough to be here is an incredible thing especially coming out of a stable in Tassie,’’ Brunton said.

“Everything has worked out great so far and hopefully it goes one more.’’

Ten per cent of the Golden Eagle prizemoney goes to charity and connections of The Inevitable are supporting SPEAK UP! Stay ChatTY, which works to promote mental health in Tasmania.

The Inevitable is a $10 chance with TAB after his Silver Eagle win where he laid his credentials out running the fastest last 600m of the race in 32.79 and, importantly, the best last 200m of 11.12 (Punter's Intelligence) as he surged away late.

Things have gone a lot more smoothly for Brunton since the Silver Eagle as to make that race the horse had to endure a boat trip to Melbourne then a float ride to Sydney after he couldn’t get a flight – this time around he’s been based at Waratah Thoroughbreds.

He had his pipe opener on the Goulburn course proper last week and drew almost perfectly in barrier three – Brunton’s favourite number is four so that’s what he wanted but sadly it went to Kolding before he could select a marble.

“He overcame a big trip, it was arduous on him and lightened him off but credit to him and the character he's got,’’ he said.

“He always seems to know where the line is, he's a winner and that's going to be very important. He has a competitive attitude that's second to none and I like that about him.

The short and tall of it - pint-sized Tasmanian visitor The Inevitable (left) with a stable companion. 🐴 pic.twitter.com/z7nJjkPbeX

“We had to take him out to Goulburn for a grass gallop because he was getting fat like me.’’

So, what does Brunton want to see happen in the run for The Inevitable to allow jockey Nash Rawiller to give him his chance against a crack field of four-year-olds?

“A good drag, he needs cover because he has an awesome turn of foot,’’ he said.

“He has an incredible desire to want to hit the line, you can't buy that and you can't train it into him.

“He's not the type of horse you're going to be able to push out on because he's just too small. So he needs a lot to click for him.’’

If it does click, Brunton will consider Rawiller forgiven for stripping the Group 2 Sunline Stakes from his mare Lady Lynette on protest back in 2012.

For the best part of the $4.1 million first prize seven years doesn’t seem like such a long wait.