Trainer Les Bridge is growing in confidence that he has reigning TAB Everest champ Classique Legend on track to defend his crown in the $15m sprint classic come October 16.

The grey has been back in Sydney since early June and come this weekend his work will be ramped up as Bridge eyes an official trial on August 24 at Randwick.

And speaking on SEN Track on Tuesday morning, Bridge said Classique Legend is responding to being back at home and has strengthened right up in the past six weeks.

“If I can get him mentally and physically at the same level I had him last year I will get the same result,’’ Bridge said.

“I can only tell you what I believe. I told you last year and I’m telling you this year. You never know in this business. But it’s looking good, I’m happy.”

Classique Legend has raced only once since his famous TAB Everest victory last year, failing in the Hong Kong International Sprint in December.

He returned to Bridge after bleeding from one nostril following trackwork earlier this year with his owner Bon Ho aborting his plans to campaign in Hong Kong’s biggest sprints and focusing on his Everest defence – which was always going to happen but likely in more ‘hit and run’ fashion. 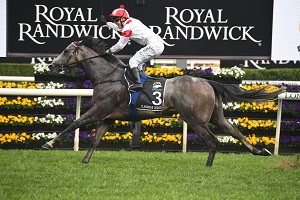 Bridge said it’s been remarkable to see the rising six-year-old blossom and it’s raising his confidence levels that he is on the same path as 2020.

“The horse has just thrived since he’s come back, he looks beautiful. He’s a smart horse, he’s a champion.”

While Kerrin McEvoy has been on the gelding’s back ‘once or twice’ recently, Bridge revealed the secret weapon in his camp is former jockey, turned trainer, Peter Robl who has been working the horse.

“I’ve done what I normally do with him. He’s been doing a lot of slow work, Peter has been riding him work for me, and he’s just started to do a bit of pacework,’’ he said.

“Peter is a superb person to have on the horse, with his judgment and his experience. I couldn’t get anyone better. He’s tickled pink with the horse.”

Classique Legend is the $6 second favourite in TAB’s all-in Everest market and is assured of a place in the field as his owner is in possession of a slot.

Bridge said he’ll decide after his first trial next month whether the horse needs a second but as it stands he’s planning to replicate his preparation from 12 months ago.

“He’s just at the stage now where in a month he’ll be ready for a nice half mile trial,’’ he said.

“I’m going to do the same as I did last year, almost exactly, give him one trial then run in the Shorts, the Premiere then the Everest.”

Meanwhile, Golden Slipper winner Stay Inside made his first move towards an Everest slot with an impressive win in a barrier trial at Randwick on Tuesday.

The colt, $8 in TAB’s Everest market, scrambled out of the gates but recovered quickly to track the leader Riodini in the 900m heat then edged away to a 1-1/4 length win.

All the results and replays from Tuesday's Randwick trials