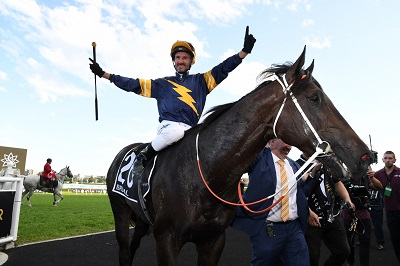 The 49-year-old has won the feature Randwick mile seven times and five of them have now been on three-year-olds.

Boss answered the SOS from Team Hawkes to ride Brutal in this year's race edition and after the O’Reilly colt snuck into the field with saddlecloth 20. It was smooth sailing for Boss and Brutal from the wide draw coasting across to sit outside of Dreamforce, with Fundamentalist handing up, before those two controlled the race from the front.

Hartnell, who settled in behind the leaders, poked home for third while Japanese international Kluger charged to the line to run fourth, despite getting fizzed up in the yard pre-race.

“I’m in awe of the colt,” gushed Boss, “I know they’ve got light weights and he got himself in a spot but he just cantered to the 1000m and I thought I was on the horse I wanted to be one. He gave me that real soft feel. He just felt confident underneath me.”

“There was never a point in the race when I thought I was going to lose. He hit a few flat spots on the track but within one stride he came straight back underneath me. He has very good control of his body.”

“I think back to the start, Sprint By (in 1996) kicked it all off. I’ve got grey hair and not much left but I’ve still got the passion to go the hard yards to do this thing. To get down to the 49.5kg shows I’ve still got the drive to test myself. Victories like this make it all worthwhile.”

It was the first Doncaster victory for Team Hawkes since brothers Michael and Wayne joined forces with their father John.

“The last Doncaster we won was when Dad won it in his own right, with Over as a three-year-old, he beat Sunline.”

“(Glen Boss) told me he was the winner two weeks ago. He’s a super colt, he’s an absolute star.”

“With only 49kg and after he ran second to Winx, we were confident this was the right race for him. When you’ve got 49kg you can do that, Boss gave him a gun ride.”

“Private Steer was special because she got knocked down several times. She should not have won. My first one was what set me on my way,” reflected Boss.

Check out the results and replays for Day One of The Championships.